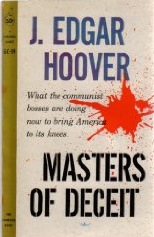 During a recent cleaning of my garage floor, I noticed J. Edgar Hoover's Masters of Deceit under a stack of flooring tools. Although this book is over fifty years old, I decided that it might be interesting enough to give it a read. The Soviet Union and communism have always intrigued me, and I figured a person with Hoover's status could offer some information and perspective I did not possess. Although this book was written in a much different historical period and the information was somewhat dated, it was new to me and kept me reading. Hoover's writing on communist history, party life, and underground tactics was informative.

I found myself in a couple of quandaries while reading this book, the first of which was what to do with the claims made by Hoover. While understanding the age of the text, I still had a hard time accepting the lack of sources to back up his claims. Although I understand his position as F.B.I. director probably made him privy to classified information, Hoover rarely mentioned any sources to back up his claims. Of course, this assumes that Hoover wrote the book, which brings me to my second quandary. There are apparently some questions about whether Hoover did his own writing or if he used F.B.I. ghostwriters. Not wanting to dive into a massive research project on Hoover, I'm willing to throw him a bone and honor his claims as credible and believe he was the author.

After checking my historical privilege on what actually happened to Soviet communism, I was able to see how Hoover walked a fine line between exposing the actual threat of Soviet communism and manufacturing paranoia to create obedient fear among the U.S. citizenry. The following is a typical example of this manufactured paranoia.

Through the use of Aesopian language he [Nikita Khruschchev] is seeking to induce the Western world to relax its guard until the time when the communist world is ready to launch its offensive and hopes to chant the “funeral dirge” over the free world. (287)

Many modern right-wingers surely have read Hoover's works and learned from them how to incite fear and paranoia through the written word. The terror attacks on September 11, 2001 have ushered in a new target for the scared conservatives: Islam. Scores of books, speeches, and conservative radio talk-shows have ranted about how “Islamic Terrorists” are seeking to destroy the U.S. Minnesota's own Gayle Quinnell is a product of this McCarthy-like paranoia against Islam.

McCain Volunteer Sends Out \”Obama is an Arab\” letters

For this reason we must be absolutely certain that our fight is waged with full regard for the historic liberties of this great nation. This is a fundamental premise of any attack against communism.

Too often I have seen cased where loyal and patriotic but misguided Americans have thought they were “fighting communism” by slapping the label of “Red” or “communist” on anybody who happened to be different from them or to have ideas with which they did not agree.

Smears, character assassinations, and the scattering of irresponsible charges have no place in this nation. They create division, suspicion, and distrust among loyal Americans-just what the communists want-and hinder rather than aid the fight against communism. (290)

If only the so-called patriotic right would listen to the entire message coming from one of their revered historical figures, we might not have as much fear and hate mongering about Islam in the U.S. today.