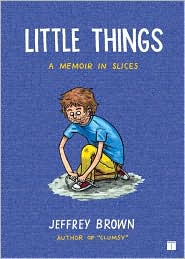 By all laws of logic and mathematics, I should love Jeffrey Brown’s graphic memoir Little Things: A memoir in slices. We like the same music, we’re about the same age, we’re both writers, and this is the stuff that fills his book. Seriously, I should have a full-blown crush on this book right now.

The problem is, I think, that Brown is too much like me, and most of the 30somethings I know. His stories, while amusing at times, lack the kind of emotional significance and depth I look for when I read. And that’s not to say every story you read has to be a life or death moment of drama-filled importance. However, the onus is on the writer to include in his/her story why exactly the story is being told at all. And that’s what each of the slices is missing, the whyness of them.

Each of the slices or stories in this book have the feel of stories you tell your friends at bars, a “so this happened to me once” aura about them. They are the kind of stories that are entertaining for as long as it takes you to drink a beer, and are forgotten by the time you settle the tab.

While I can appreciate the simplicity of the art, and how it adds to the stories, there are very few of them that really stuck with me. Even now, as I write this, I have to keep flipping through the book to try and remember what exactly he wrote about — that one trip to the mountains, a car accident he saw, a girl he liked. . . I did remember (without any help from looking at the book) the panels where Zak Sally appeared at Big Brain and when Brown picked up some Andrew Bird CDs, but still . . . is that enough?

I don’t think so. If this memoir weren’t accompanied by Brown’s artwork, if it were just a traditional memoir, I am convinced it would have never seen the light of day. There’s just not enough there, and that’s totally disappointing.