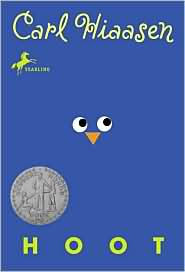 Carl Hiaasen is well known for his offbeat characters, wry sense of humor, and his environmentalist passion. Every novel of his that I’ve read so far has carried those elements. His novel Hoot is no exception.

New kid in town, Roy Eberhardt is being harassed on the school bus by local bully, Dana Matherson (for some unexplained reason the driver remains oblivious, never hearing a thing and only looking back when he makes a stop, giving Dana plenty of warning to sit back in his seat and look all innocent). As Dana has Roy’s face plastered against the bus window, Roy sees a strange looking boy dashing barefoot through the neighborhood.

Roy’s curiosity grabs him and he decides he needs to find out who this boy is and what he’s up to. Jump over to the site where Mother Paula’s All-American Pancake House is to soon be erected. The area has been vandalized. The vandalism starts with all the survey stakes being pulled out, and then continually gets more elaborate as the novel progresses.

Hoot is a quick read and a fun book with a handful of typical Hiaasen characters. Unfortunately, unlike some of Hiaasen’s previous books, Hoot is also one-dimensional and very predictable. It takes no time at all to find out who the vandal is (it probably took me a little longer than it should have just because I disregarded the obvious), why the site is being vandalized, and how the story is going to end. There are no red herrings, in fact, no misdirections of any kind (that in itself might catch the reader off guard). I know this is not a mystery novel, nor is it meant to be. But c’mon, make the reader think at least a little bit.

So why did I like this book? I really enjoyed getting to know these characters. Hiaasen has the ability to give a depth to his creations and make them feel real to the reader despite all of their quirks. Officer Delinko has aspirations of becoming a police detective only to fall asleep in his squad and wake up thinking it’s night because someone spray painted all of his windows black; Beatrice Leep, tough gal and soccer player who can literally take a bite from a bicycle tire; Mullet Fingers, need I say more about him? And straight man (or straight boy) Roy Eberhardt keeps it all tied together.

This is a great book if you like to read on the bus to and from work, or if time limits you in some other way. There are a lot of good stopping points and not so much going on that you’ll be able leave it for a couple days (say, the weekend), open it up, and know exactly where things left off without giving it much thought. It’s probably not a book that will stay with you very long after you’re done, but if you’re anything like me (and that’s a scary thought) you’ll be cracking a smile throughout. Now ain’t that a hoot?