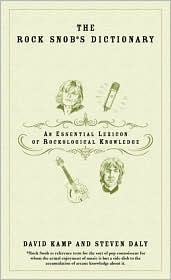 I have to admit The Rock Snob’s Dictionary: An Essential Lexicon of Rockological Knowledge was probably not meant to be read from cover to cover like most books. Really, who sits down and reads the dictionary?

I did, and it was a little exasperating. Mostly because the definitions started to get a little samey. How many times can you use the word hirsute in one book? Apparently 48 kabillion. Ditto lodestar. In fact, those two words were used so often that I started to count each instance. But then I decided that was insane and stopped.

Reader insanity aside, The Rock Snob’s Dictionary was awesome. I’m one of those music people who wishes to attain musicgeekdom, like High Fidelity, track one side one kind of geekdom. While I have the desire, I lack the knowledge. This dictionary’s got your knowledge right here.

I learned that Don Arden who was the manager of The Small Faces is also Sharon Osbourne’s dad. Also, while I always knew Tim and Jeff Buckley were related in some way, I didn’t realize they were father and son.

While I enjoyed the definitions about a bunch of people I vaguely remember hearing about, my favorite parts of the dictionary were the explanations of rock crit vocabulary cliches. Plangent, roots, psych, sun-drenched — I always wondered just what the hell those really meant when talking about music.

Plangent: Standby rock-crit adjective used to lend a magical aura to any nonaggressive guitar-based music (even though the word’s primary meaning is “loud and resounding”). Stipe’s muffled vocals and Buck’s chiming, plangent guitar made REM’s Murmur one of the most auspicious debuts of the eighties.

Their genre definitions were pretty awesome too:

Alt. country. Self-righteous rock-country hybrid genre whose practitioners favor warbly, studiedly imperfect vocals, nubby flannel shirts, and a conviction that their take on country is more “real” than the stuff coming out of Nashville. Heavily influenced by Gram Parsons. Also known as the No Depression movement, after the title of an album by the seminal alt.country band Uncle Tupelo (which itself purloined the title from the Carter Family song “No Depression in Heaven”). Though such alt. country standard-bearers as the Jayhawks and Neko Case continue to embrace the genre’s conventions, the former Uncle Tupelo mainmen Jeff Tweedy and Jay Farrar have emphatically de-twangified, the former as the leader of the crit-beloved pop eclecticists Wilco, the latter as a solo artist after disbanding his post-Tupelo alt.country band, Son Volt.

Reading the book was pretty fun and educational. However, I have to admit, I loved it the most when they wrote about things I already had pretty good knowledge about (The Replacements, Big Star) because it gave me the smug sense of self-satisfaction that maybe a part of me was already the musicgeek I so longed to be.