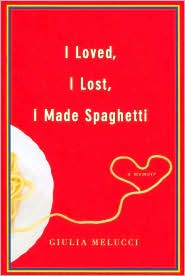 Typically when I read a book, I dog-ear pages with great sentences or ideas I like. With Giulia Melucci’s unfortunately-titled food memoir I Loved, I Lost, I Made Spaghetti, these notations were never about a turn of phrase — they were about a turn of the proverbial spatula. There are at least a dozen recipes in this book that I plan to test.

This easy-reader — six hours, cover to cover — is about Melucci’s relationship history, and what she was whipping up for the series of gents who have come and gone. Mostly pasta, sometimes fish. A bit of meatloaf. Blueberry muffins, Yorkshire Pudding, and Risotto. Fresh vegetables, red pepper flakes, slivers of fresh Parmesan cheese.

With an Italian background, Melucci’s knows her way around red sauces and mozzarella. She also adapts recipes from Epicurious, Bon Appetit, and friends, and comes up with cute autobiographical names for her meals: No Nookie Gnocchi, Ineffectual Eggplant Parmigiana ( which didn’t save her relationship with Marcus), Fuck-You Cakes, Real Estate Roast Chicken (celebrating the purchase of a condo), and Welcome Back to the Big Apple Apple Muffins, when her Scottish boyfriend returns from Europe.

Melucci is a bit of a serial monogamist — I wish I could say cereal monogamist, but unfortunately she only talks about something Raisin Bran-esque once — and in her memoir she starts with Kit, her first boyfriend and a regular old woo machine, then there is the skittish Ethan, a relationship that ends with a marriage ultimatum. Mitch is a Red Hook hipster who introduces her to The Strokes, Marcus is an AARP member who shuttles Melucci around town on a Vespa, and breaks up with her via caustic email. It ends with Lachlan, a sleepy Scottish writer whose book she gets published. (Which leads her to writing her own book).

I spent a lot of time thinking about why I didn’t hate this book at all, which probably isn’t a good sign. But here is my justification:

NOTE: I’ve already tried her Risotto with Intricately Layered Hearts, which is a mix of arborio rice, Taleggio cheese and artichoke hearts. It was pretty intense. Next up: Summerhouse Tuna Salad, which is just tuna mixed with onions, tomatoes, capers, and parsley.