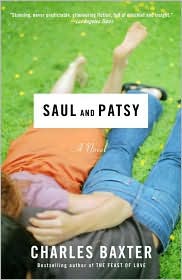 Saul and Patsy are in love. (Maybe too much so, according to Saul’s mother, who thinks it’s show-offy to be so in love and that it makes other people uncomfortable). They live in a small town in Michigan, off a dirt road, where they have moved from the east coast because of Saul’s whim to be a teacher.

Saul and Patsy: yet another sigh-inducing and pleasant Charles Baxter novel.

Saul is neurotic, in his own head, and wishes the rest of the world was like Patsy. Meanwhile, she is the voice of reason, the laid-back <i>meh, maybe-I’ll-work-at-a-bank </i> half of the relationship, talking Saul off the ledge (or roof, as the case may be).

More than building up to some sort of frenzied climax, the novel follows them quietly through little chapters of their life: That time they flipped the car after that party; Saul’s albino deer sightings; Patsy’s intuition toward what, if anything, is growing in her uterus. Characters drift in and out, including Saul’s mom, who has taken a 17-year-old lover.

Saul’s student Gordy, from a remedial writing class, starts showing up in their front yard and staring at the house in a way that is unsettling. Saul drives Gordy home, and this strange, foul smelling boy shows up again and again. Eventually the student does something midway through the story that reads like the last chapter of a novel. His actions instigate a city-wide cult-like following that puts Saul and Patsy in the spotlight, for better or for worse.

Gah. I love Charles Baxter. You can read a paragraph and something major happens right in the middle of it and you think “Wait. Did that just happen?” He never quickens the pace or plays a loco clarinet to announce something big is on the horizon. It just happens. Next scene.

He can take a story of a lovey dovey twosome, dangle tragedy in front of them, and then make it go away. He’s unpredictable even in the most everyday, age-old, no-frills story.

But best of all, if you read it slowly enough, you can hear Morgan Freeman narrating it. Just like he did in the film adaptation of Baxter’s novel Feast of Love.