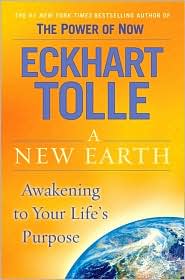 In 2008, I listened to Krista Tippett interview Eckhart Tolle for her radio show Speaking of Faith and became interested in his ideas about living in the present reality. Tolle has also been involved with Oprah Winfrey in both a webinar and a radio show that discussed this very book, A New Earth. The authors, psychologists, physicians, and other guests of Winfrey often become extremely popular after they appear on her show. These same guests also often become lighting rods for criticism. While Tolle has not yet reached a Dr. Phil-like level of popularity, his body of work has certainly earned both generous amounts of praise and criticism.

The New Age label is commonly pasted on Tolle's work, as well as the work of many spiritual writers that lack a common religious affiliation. As a person who has religious and spiritual beliefs that probably fall into this label, I was comfortable with many of Tolle's ideas, particularly those concerning being awake in the present reality, the necessity of a shift in world consciousness, detachment to ideas and things, and the role of a person's ego in suffering (both personally and in the larger world).

However, many are not comfortable with Tolle's insights in this book because they suffer from clinging to their own ideas and beliefs. Tolle offered this Zen saying:

“Don't seek the truth. Just cease to cherish opinions.” What does this mean? Let go of identification with your mind. Who you are beyond the mind then emerges by itself. (121)

Tolle offered many Zen stories and sayings in this book, which brings up an interesting observation about long books on spirituality. Tolle's message of letting go and living in the present is simple and yet he spends too many pages examining it. I understand how it might make the book relevant to offer many examples and interpretations to help the reader connect with the concept. However, after a time it becomes a bit tedious to read, which may end up doing more harm than good. It is like the person that talks too much about something rather simple. After awhile, it becomes background noise and eventually ignored.

Tolle quoted Krishnamurti's secret, the essence of his teaching: “I don't mind what happens” (198). This sentence is essentially the message Tolle is trying to convey in this book. While I understand the practicality of explicating this message, one should not overdo it. Tolle flirted with doing just that in this book.

Despite my beliefs about simplicity, Tolle's attempts to be relevant were solid. Here is a Zen story about letting go of the past.

The inability or rather unwillingness of the human mind to let go of the past is beautifully illustrated in the story of two Zen monks, Tanzan and Ekido, who were walking along a country road that had become extremely muddy after heavy rains. Near a village, they came upon a young woman who was trying to cross the road, but the mud was so deep it would have ruined the silk kimono she was wearing. Tanzan at once picked her up and carried her to the other side.

The monks walked on in silence. Five hours later, as they were approaching the lodging temple, Ekido couldn't restrain himself any longer. “Why did you carry that girl across the road?” he asked. “We monks are not supposed to do things like that.”