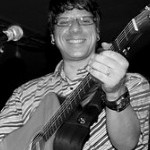 Wow. I just gotta say sometimes fortune shines down on me when I least expect it. As I was pondering what to write here in this intro of David de Young of How Was the Show, I stumbled on Jim Walsh’s excellent, informative piece on de Young for Minn Post. You should go read that, if only to find out how many gigs de Young has attended, the gear he carries, and if he ever sleeps. No spoilers here. Instead, I’ll let you know that How Was the Show is celebrating its 7th Anniversary on Friday at the Turf Club with Big Trouble, Aby Wolf, Communist Daughter, and The Inwood Radio.

What book(s) are you currently reading?
I just finished The Song Is You, the latest from Arthur Phillips. He's actually originally from Minneapolis, and though the book takes place in New York there are local references, including a couple to songs by Chan Poling and the Suburbs. I've read the Egyptologist by Philips and also Prague. The Song Is You may be his best yet. From there, I've just started The Professor and the Madman: A Tale of Murder, Insanity, and the Making of The Oxford English Dictionary, which my dad sent me recently. It's fascinating. Sounds erudite, and I suppose it is. But it’s also a bit of a thriller, despite being based on actual historical events.

Have you ever had a crush on a fictional character? Who?
Probably Alice of Alice in Wonderland, dating all the way back to when I was a kid. That may have been influenced by seeing an early film version in England as a child. Most recently, I probably had a bit of a crush on Arthur Phillips leading lady, the Irish singer Cait in The Song Is You.

If your favorite author came to Minnesota, who would it be and what bar would you take him/her to?
Vonnegut was my favorite author. If he was still alive I’d probably rather not take him to a bar, just have him read from a podium in a book store and listen to him tell stories. It’s funny you ask that because when I was in college, a friend of mine and I actually contemplated driving to California and taking Bukowski to a bar because, well, we figured he’d actually go with us as long as we were buying.

What was your first favorite book?
Slaughterhouse-Five.

Let’s say Fahrenheit 451 comes to life, which book would you become in order to save it from annihilation?
I suppose Fahrenheit 451 is not an acceptable answer! Ha. I think I’d be pretty popular amongst folks I like if I became A Confederacy of Dunces by John Kennedy Toole.

What is one book you haven’t read but want to read before you die?
Probably Ulysses, which I keep starting and never seem to finish. I know a lot of people answer this question with Moby Dick, but that’s not very high on my list at all. Fortunately, I was a voracious reader as a young adult and an English major in college so I got a lot of the classics out of the way early.