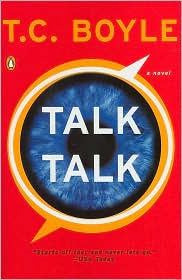 The “chase-scene-as-plot-structure” can be an exhausting thing. The chaos, the misunderstandings, the almosts, and coincidences. It can all decompose into a sloppy, cartoonish stink, racing to finish the book instead of reading and enjoying the tension and feeling the characters’ burdens.

Typically, I consider this the lazy writing of an author with a to-do list — a wacky hijinks quota.

Talk Talk by TC Boyle is a welcomed exception.

It opens with Dana Hartley, a deaf woman who is late for a dentist appointment. She gets pulled over by a cop after a tap-n-go at a stop sign, and is arrested for a litany of crimes: bad checks, auto theft, assault with a deadly weapon. After a weekend in county jail that forever changes her opinion of the common drunk, she learns that her identity has been stolen. The police have no plans to help her. It’s not a bloody crime, but it is a waste of resources. Dana and her boyfriend, a slightly-younger computer graphics guy, try to hunt down the thief.

The thief is a man living as Dana Hartley in a posh home with a beautiful shopoholic and her young daughter. This version of Dana Hartley is a well-dressed foodie with a thing for nice cars. He quickly realizes that he is being hunted. He acts fast, quickly adopting the identity of Dana’s boyfriend Bridger Martin and moving across country with his suspicious, albeit pliant girlfriend and daughter.

While this has all the coincidences and accidents and misunderstandings of all “chase scene as plot structure” stories, the added element of the original Dana’s deafness adds a level of isolation that the character doesn’t seem conscious of — she’s a toughie, and has been schooled in maintaining her independence — but for the reader feels heavy and tough. Whenever she goes head-to-head with the police, it requires more time and effort. One time, another character tells the police that Dana is a crazy woman and that she is mentally retarded, which puts the heat on Dana to prove her innocence, and once again, the thief escapes.

Other interesting plot notes: The thief is indignant that these people would dare hunt him down, which is a nice and honest personality play; and Dana and Bridger are on this hunt early enough into the relationship that Bridger’s parents don’t even know he has a girlfriend. Their familiarity level still has that new-car smell, and this is an unexpected bath of Drakar.

The ending is hit-or-miss, and I imagine could ruin the book for some.

I’m not going to blow sunshine and say this is the greatest book of all time. It’s a fun little read by a good writer that surpasses in quality a lot of other good little reads by good writers.