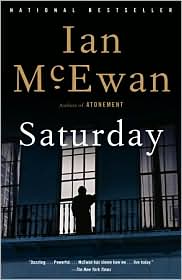 Henry Perowne, neurologist, father, husband, squash player on the brink of retiring and a man whose interest in cooking exceeds his talents, wakes up early on a Saturday morning and stands at the window and thinks and watches and thinks some more.

He thinks about his day and his wife. He sees a fiery plane zip across the sky, quiet witness to something that will play out in the news. He goes downstairs and talks to his blues-guitar playing son, who is on the tail end of Friday. He goes back to bed. He does it with his wife. He wakes again and prepares for a game of squash against his colleague and friend.

And so it goes for nearly 100 pages of Ian McEwan’s Saturday: The mind-numbing minutia of one middle-aged man’s day. What he drank. The traffic. His thoughts on the biography of Darwin that his daughter has suggested he read. Just when I was starting to feel claustrophobic, stuck in this man’s head, he would throw out one or two golden paragraphs as if to say:

“Bear with me. This is going somewhere.”

A few times I wondered if McEwan had mastered the art of the novel told in real time. If a community theater adapted this as a screen play, would it take 24 hours to perform?

The snippets of good include: The story about how his daughter, the poet, had a falling out with her grandfather, the poet; His son’s band; His rivalry on the squash court; A minor car accident with some thugs, where Henry escapes unscathed after diagnosing the driver with a brain disorder and sneaks away in the confusion; The paragraphs set in the kitchen as Henry prepares a seafood stew.

When, at less than a hundred pages into the novel, I started to get bleary eyed and bored, it was these tiny gems that kept me going. “You better make this worth while, Ian,” I said to myself. “This better be more than a ‘And then I had a grilled cheese sandwich’ blog post.”

McEwan had already proven himself a great writer with an eye for detail and an understanding of personal relationships. If this was the trick the pony had in mind, he’d succeeded already, and I didn’t think I needed 100 more pages of the same.

I stuck with it just to see what, if anything, would happen.

The climax is chilling. An intrusion from the thugs that Henry encountered earlier in the day and this family’s nice life of high ceilings and champagne, publications and recordings, view of the square and gainful employment, is all threatened. Typically, I wouldn’t go this far into a novel for a review, but in this case it’s necessary. You need to know that something happens.

In the end it’s all worth it. I promise. This should be a secondary title or something. “Saturday,” by Ian McEwan written in large font. “Stick with it, it’s worth it” in parenthesis beneath it.