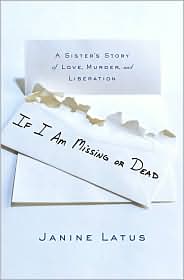 The title of this book comes from a line in a note written by Janine Latus's sister Amy. Drowning in a horrible relationship, Amy tapes the note inside her desk drawer at work saying, if I am missing or dead, it's probably this guy's fault. Turns out she was absolutely right. Amy did go missing and eventually turned up dead. And strangely, the book isn't Amy's story. That's okay, because what Janine Latus gives us is a tale just as haunting and violent as her sister's note implies.

Latus begins her tale describing her place in the family order ? a middle-middle child ? one of eight. Amy was the baby of the family, but Latus doesn't hold that against her. And while Latus struggles to come into her own, she is either picked on or ignored, which can't be good for a girl's self-esteem.

At times it was extremely difficult to read this book. So many horrible things happen along Latus's path I found myself wanting to reach out and give her some relief. I wanted to carry her load for a year or two and somehow give her happiness. Her father is overly affectionate with his daughters, kissing them on the mouth and giving them birthday spankings well into their teens. He also taunts and teases his girls for not being cute enough, or for being too flat chested. When Latus comes home after being dry-humped raped by a neighbor while baby-sitting for the neighbor's kids, her father tells her don't tell anyone, if this gets out, you'll be known as a slut.

Latus continues on a downward spiral. She survives an actual rape and several beatings. I hate using the words “battered woman syndrome,” so does Latus. In fact, it never even occurs to her that she might be in that group. Over and over again she wonders if she did something wrong, if somehow it was her fault. Then she cheers herself up by saying, I'll just have to do better somehow, I'll have to find a way. Please let me find a way so I'm not alone. Classic signs, but never does she reach out for help to someone who can actually help her.

Latus does eventually find love. After she is severely beaten she leaves her abusive boyfriend and falls into the arms of a married co-worker, a married co-worker expecting a baby. The type of guy who has no problems leaving his wife and six-month old child for weaker prey. It's only a matter of time before Latus marries him. During her marriage, Amy grows up and moves out of the house. She too finds her own bad boyfriends. Amy takes a few beatings herself. And while this strengthens the bond between the sisters, never do they say, you know?this is really fucked up. Maybe we need some help.

Latus tells her own tale here with her sister Amy as a strong supporting character. You feel the bond they have, but also the need to not let the other look too closely at the fine print. It seems ironic that in the same four-week period that Latus finally grows a pair and leaves her bullshit excuse for a human being husband that Amy goes missing. It so easily could have Latus herself, and she knows that. Latus and Amy walked down the same path in so many ways it's amazing that one of them is left to tell the tale.

While we see the affects of Amy's death on the family, we are not given too many details about the murder itself. This isn't written as a murder mystery. Her last days are not pieced together. There is no plot twist at the end. No handsome detective to the rescue. It's very simple. Amy was in a bad relationship. The man she was with killed her. Amy knew something was going to happen to her, but as to the why?we are left wondering.

I have great respect for Ms. Latus as a writer. To put into words these experiences. To put these words on a page and claim them as her life is amazing to me. To relive over and over, in her own memory and again with editing and revision, these devastating and traumatic events, it chills me to the bone. Ms. Latus seems to have a hidden well of strength inside of her, I've no doubt fueled by her sister encouraging her and loving her from on high.