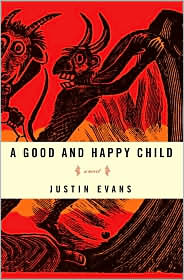 It’s amazing the way one good sentence can give a book momentum. Early in the novel A Good and Happy Child by Justin Evans, there is a description of the way the main character’s family lives:

“It was a house halfway between this and that, between upper-middle-class luxuries and absentminded squalor.”

This is how we live. It made me feel like our mail-covered dining room table and the books and Gatorade bottles next to the bed aren’t the mark of lazy gross people. It is interesting and intellectual. And it’s that sentence I kept going back to, reading and rereading and chuckling.

A Good and Happy Child is the story of George Davies. A 30-something man who goes to his therapist because he is concerned about his inability to hold his newborn son. It’s causing a strain in his relationship with his wife. In his first session, George confesses that he was in therapy as a tween, and the doctor suggests he fill notebooks with the story of what happened 20 years ago — an era he has buried in his mind.

Back in the day, George was an awkward and unpopular child who’s father had recently died. He begins “seeing” an apparition of a little boy, who tells him things about how his father died and instructs him on how to act. His mother, a skeptic, considers these hallucinations. His father’s intellectual friends from the local university tell him that he is possessed by a demon. George begins investigating his father’s life and finds that he was considered a mystic, and that he also had visions.

There is a standoff: After George, or rather “other George,” cuts the brakes on the car of a family friend, he is sent to the psyche ward for evaluation. The doctors want to commit him. His father’s friends want to perform an exorcism. George is in the latter camp, and when his mother forbids him to see his father’s friends, things turn desperate — both in the stories that fill the notebooks, and in the adult George’s life.

This novel is written in a really quiet and precise Edgar Allen Poe voice. It’s one of those “But nobody believes me” stories that are so stressful to read. And George’s father’s friends are a collection of fanatics that resemble a hooded cult in a 1990s made-for-TV movie. There are parts that drag — where revisiting that early, favorite sentence kept me going. But the final third of the book is so satisfyingly creepy. And the ending is so terrific that a book I would ordinarily give three stars pushed itself to four.