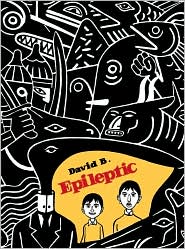 The point here is that LHB proclaimed that David B’s Epileptic was his favorite graphic novel, even though it’s a memoir (why is it that graphic memoirs are always called graphic novels?). I’d have picked it up based on that endorsement alone, but the luck I’ve had reading graphic memoirs (see: Persepolis, Fun Home, and It’s a Bird) made me extra excited.

Holy crow! This is the kind of book that kicks your ass and ties your brain in a knot. It’s not for the faint of intellect or for those who cannot handle emotions laid bare.

Epileptic, called L’ascension du haut mal (which means The rise of the high evil) in France where it was originally published, tells of David B’s life growing up in the shadow of epilepsy. David isn’t afflicted with the disease, it’s his older brother Jean-Christophe, but the entire family suffers.

Jean-Christophe’s (a name I like to say over and over in my head in my best French through Minnesota accent) parents are desperate to find something to help their son who suffers up to three seizures a day. They drag their three children from macrobiotic commune to shamans to quacks and back again, hoping to find an answer, a cure.

David B. narrates the story with black and white drawings and simple sentences, and somehow the entire book feels incredibly lush and nuanced.

It took a lot of bravery to pen this memoir. Nobody is portrayed in a flattering light. His parents seem desperate and easily conned; Jean-Christophe is excessively needy and at times withdrawn and sullen, never taking responsibility for his life; David B. is at turns immature and at times callous; and poor Florence is the forgotten youngest child.

And yet all this dysfunction is incredibly readable. Throughout the story I kept hoping the family would find an unintrusive way to cope with Jean-Christophe’s disease. I longed for a happy ending, and there was just no way that was possible. But David B.’s unsentimental, emotionally-bare way of telling his story makes reading through the horrors that haunt him both in real life and in his head wholly rewarding.