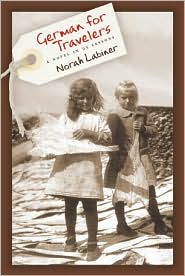 This might be stating the obvious, but I love reading. It’s my favorite pastime and something I do every single day. That being said, not many books are fun to read. It’s not like reading is a buzzkill or painful, it’s just not, you know, fun. It’s kind of hard to explain. Norah Labiner’s German for Traveler’s was a lot of fun to read. The way Labiner plays with language and storytelling, made me smile in the middle of a page. It’s as though I could tell she had fun writing that sentence or paragraph. Her book is smart and clever in the way that makes you feel like you’re in on a joke.

I have loved many books so far this year, but none have been as fun to read as this one. It sounds weak and sort of cliche, but this novel is absolutely delightful. Labiner tells a story (or stories in this case) unlike anyone I’ve ever read before. Her writing is prose that verges on poetry filled with wordplay and mystery and wonder.

The narrative shifts around in time, filling us in on the Apfel family in Germany, the new branch of the tree growing up in the midwest, and what’s going on in present-day Berlin. This is not a novel for people who are tied to the more traditional structures of fiction featuring rising tension, climax, falling tension. This is a book for the literarily adventurous and open-minded.

Some of the most beautiful, amazing scenes take place during the wedding of Lemon’s parents, Amalie Apfel and Mitchell Leopold, in the 1950s, some fifty years before the “present-day” action. You know right from the start of this wedding that things were not going to be easy for Amalie and her groom.

German for Traveler’s breaks all the rules of most modern fiction. The point of view is shifty, the narrator is oftentimes unclear, the time line is jumpy, and yet somehow Labiner makes it all work. Every single bit of it, and that’s all that matters. There wasn’t any point where I felt like, “come on, get to the point already” because the point is everywhere. The point is in the language and the way these stories are told.

And even though I keep yammering on and on about the language and the storytelling, the characters are amazing too. From the mysterious Elsa Z to the cold and coy Madame Apfel, to Hart Luther, Eliza’s deceased husband, who died tragically. Though he is only the smallest of minor characters. I had a big giant crush on Hart, who was described like this:

A first-rate fabulist, phenomenologist, defender of defeated causes, and most usefully here, Eliza’s authority on rotten luck. He said: To each according to his needs, from each according to his abilities. He lamented: Time is the fire in which we burn. He pronounced: Every man his own football! He railed: I think of Germany at night: the thought keeps me awake till light. Once as he and Eliza rushed through a station to catch a departing train — he made it to the platform first — and he called out to her: Run, comrade run; the world is behind you.

And she ran. She grabbed his hand.
She regretted nothing more, nor remembered anything better

Sigh. Aren’t you a little in love already?