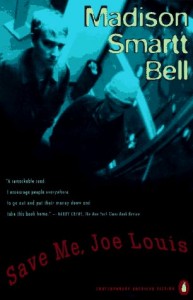 Madison Smartt Bell's Save Me, Joe Louis is a violent book filled with drug abuse, robbery, and murder. Racial & sexual orientation slurs and degrading portrayals of women were also prevalent throughout this book, which chronicled the lives of Charlie and Macrae, two drifters who connected in a New York City subway and began a life of crime. The duo started as muggers and quickly progressed to committing armed robberies, which turned deadly when they committed them in Maryland and Tennessee.

Perhaps Bell's point in writing this book was to illustrate the fringe lifestyle and poor decision-making often found in the criminal lifestyle. Maybe Save Me, Joe Louis was supposed to be a social commentary of criminal life in the late 1980s and early 1990s. However, Bell's frequent choices about using slurs and negative views of women turned me off from enjoying whatever he might be saying about society. Apologists of Bell might say it was necessary to write this way either to show the raw thoughts of the characters or to make situations realistic. I acknowledge there are people in the world who believe the use of slurs is acceptable. I am also sure there are men who only view women as objects and inferior humans. However, every woman in the book, with the possible exception of Lacy, was portrayed negatively. In addition, the amount of slurs used in the book goes beyond what is necessary to develop a character.

I tend to think he could have made his point without joining in with the chorus of slurs and degradation running rampant in our culture. There are ways to write that can avoid the descent into vulgarity. I can personally withstand some vulgarity if it contributes to a larger meaning the writer is trying to convey. However, Save Me, Joe Louis lacked this meaning and was simply an exercise in showing how nasty humans can think, act, and write. If I wanted to see this, I would just turn on the network news.