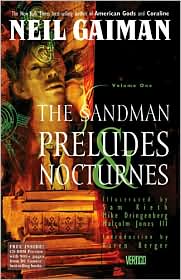 There is a sort of adage passed down from writing teacher to student, usually after workshopping a student story where the last paragraph involves the main character waking up only to discover the previous thirteen or twenty-three pages have all been a dream. Oftentimes there is an alarm clock involved.

The adage goes something like this: “Nobody cares about your dreams. Nobody wants to read about them. Knock it off with this dream nonsense.”

The problem with dreams is that they can mean anything and nothing. They’re tough to interpret and to really get the significance of the dream you often need a lot of information about the dreamer. Symbols in dreams are so incredibly specific to the dreamer that without that information it just seems, well, weird.

Knowing all this, reading the first volume of Neil Gaiman’s Sandman series, Preludes and Nocturnes was kind of tough. I cared roughly fifty-percent of the time, which seems about right. Because when someone tells me about a dream they had, I care for exactly half the amount of time it takes them to tell me the dream.

in Gaiman’s graphic novel, some old-timey, wacky British occultists try to conjure Death, in order to capture it and rule the world. By accident they get Dream, or the Sandman, Death’s relative (SPOILERISH: Death turns out to be a totally gothed out hot chick, Dream’s sister). The Brits strip him of his tools and keep him naked locked up in a glass bubble of sorts.

While Dream’s locked up all kinds of weirdo stuff happens to sleep and dreams. People either fall asleep and never wake up ala Sleeping Beauty, or they can’t sleep and eventually kill themselves. Meanwhile, Dream just sits in the bubble biding his time.

After about seventy years, the significance of which I missed or is not explained, Dream makes his way out of the bubble and vows revenge on his captors. Once he does that he makes it his mission to get back his tools, an elephant-trunked gas-mask thing, a pouch of dream sand, and a ruby.

Most of the book follows dream’s quest to get back these tools from nefarious bad guys and junkies. It’s weirdness and sort interesting, but not totally — just like dreams! There are also weird cameos by some of the superheroes from the Justice League and there are many mentions of Batman, Gotham City, and Arkham Asylum (where Batman’s baddies go to be insane with each other and let the citizens of Gotham believe they are safe). I found this kind of puzzling until I read Gaiman’s afterward, and learned that Sandman was a minor DC Comics character.

The book is about half interesting. There were bits I really liked — when Dream ventures to hell to fight the demons for his elephant trunk mask and Lucifer Morningstar, one of the rules of hell, looks just like David Bowie. I really loved the 24-hours episode where the crazy Dr. Destiny decides to wreck havoc on a diner — it was just filled with great, great storytelling.

Of course, I also liked the part with Death and Dream hanging out. But the other half was super forgettable or confusing and either pointless or a set up for the books that follow. I haven’t quite decided if I’m intrigued enough to try Volume 2. I generally like the concept, but I’m not sure how much dreamlike bullshit I can handle.