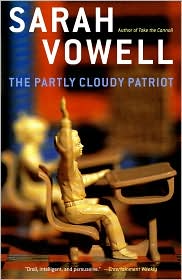 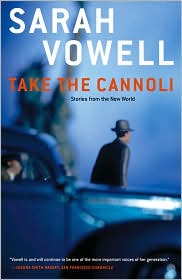 It is difficult to write objectively about a book when the author both makes you laugh and seems to always write about things that interest you. For me, this author is Sarah Vowell and the challenge is not becoming so much of a fanboy that I cannot maintain any sort of impartiality. However, the contents of The Partly Cloudy Patriot and Take the Cannoli were too much for me to resist the transformation into a fanboy, which is a significant leap above the target geek level I was at last November when I reviewed The Wordy Shipmates.

These two books were written some time ago (Cannoli in 2000 & Patriot in 2002) and offered perspective on Vowell's evolution as a writer and as a person. Whereas The Wordy Shipmates and Assassination Vacation were mainly about a single subject (Puritans and places where famous assassinations occurred), these two books are filled with short essays on a variety of historical and cultural topics. While both were infused with personal stories and anecdotes that tie into history, Take the Cannoli was different from her other books in that it was significantly more personal and offered the reader a glimpse into Vowell's life and formation as a person.

Sarah Vowell seems to write about almost everything that interests me and the vast majority of the time takes an opinion on a topic that aligns with my worldview. It is not unlike listening to my internal dialogue with the only difference being the voice is female. These two books have all the interesting stuff: goths, disdain for Andrew Jackson, Civil War, Sid and Nancy, insomnia, Puritans, and the differences between U.S. and Canadian cultures. The only criticism I can possibly muster is that I was a little bored during her many discourses about music. Unlike the vast majority of people I know, music talk bores me.

In The Partly Cloudy Patriot, Vowell wrote about the feelings surrounding her attraction to historic places of tragedy (this one being Salem, MA) and offered this worldview-aligning insight.

From the Spanish exportation of Aztec cacao, and the Dutch invention of the chemical process for making cocoa, on down to the capitalist empire of Hershey, PA, and the lifestyle marketing of Seattle's Starbucks, the modern mocha is a bittersweet concoction of imperialism, genocide, invention, and consumerism served with whipped cream on top. (42)

In Take the Cannoli, Vowell wrote about one of my favorite topics: goths. In an effort to produce a new, albeit temporary, look, Vowell went to San Francisco to be professionally made up by Mary Queen of Hurts.

When I was pondering a good goth name for myself, I paged through my reference books on death and dying looking for something gruesome. Nothing felt right. Maybe it's because I came of age in the '80s and I have seen Blue Velvet too many times, but to me, the really frightening stuff has nothing to do with ravens and rats. The truly sordid has a sunny Waspy glow. Therefore, I tell them, the most perverse name I can think of is Becky. It turns out that by saying the magic word “Becky” I have suddenly moved to the head of the class, gothwise. As Monique puts it: “You are understanding the pink of goth. You've skipped a couple levels and you went straight to pink.” (215)

I cannot help myself. Here is more of Sarah Vowell at her finest, as she takes on those who attempt to compare their form of civil disobedience to that of Rosa Parks. This was in The Partly Cloudy Patriot.

Analogies give order to the world-and solidarity. Pointing out how one person is like another is reassuring, less lonely. Maybe those who would compare their personal inconveniences to the epic struggles of history are just looking for company, and who wouldn't want to be in the company of Rosa Parks? On the other hand, perhaps people who compare themselves to Rosa Parks are simply arrogant, pampered nincompoops with delusions of grandeur who couldn't tell the difference between a paper cut and a decapitation. (123)