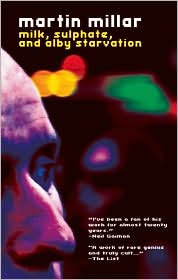 Deep and introspective, Martin Miller takes his readers on a roller-coaster journey with this dark commentary about one man's life: Alby Starvation. The inner mind of Alby is an exquisitely warped palace, where he can do no wrong, yet everything he does is wrong. The reader gets so immersed in this, that it actually starts to make sense, but Millar does a good job of checking that perspective with glimpses from other characters point of view. With a blend of futuristic vibes and historical elements, this novel feels like the reader stumbled upon Stonehenge.

This poverty is real suffering you know, nothing in the flat works and I look about a hundred and fifty. If I was rich or even well off I wouldn't look so old, rich people never seem to look so bad when they get old. How did I get to be twenty-six anyway? I mean, what happened?”
-pg 4-5

Alby is an incredibly paranoid, small-time amphetamine dealer who is about to be murdered by a Brazilian-trained hit-woman hired by the Milk Advisory Board. In addition to uncovering that milk is the source of sickness for many people, thus causing a contract on his life, Alby is constantly panicking, exhausted with worry, and suspicious of friends and strangers. Most of this is just in his head and it started long before any actual threat on his life. Since he deems himself hopelessly pathetic, Alby's best friend is Happy, his pet hamster. Happy, in contrast to his owner, actually does seem to live a content life.

We reach my flat and I put the kettle on while Fran and Julie go to talk to the hamster.
He is always pleased to see them. Look what I've got for you, says Fran, and gives him a biscuit, he takes it enthusiastically and stuffs it into the vast pouches on either side of his mouth, you wouldn't believe how much this hamster can put into these pouches, something to do with another dimension, I think.
They continue talking while I make some tea and feel relieved that no one killed me as I came up the stairs and the door did not explode as I opened it?”
-pg 120

Alby's other 'best friend' is his comic collection. Rare comic books and reggae music are his sacred vices. It doesn't seem he even wants to deal drugs, but does it to maintain friends. In his mind the only people who could possibly tolerate being around him are junkies or people interested in his comics. This is odd since he does seem to have a lot of friends; only he treats them incredibly bad. Expecting that at any moment they are plotting against him to steal his rare copies of Silver Surfer or Batman.

In classic Martin Millar style, the book is filled with ironic twists, a humorous plot line, and colorful, anti-social characters. The British slang may slow the reader at first, but it seems to fit well with the oddness of the novel. In Alby Starvation's world milk is a poison, zen masters have fierce arcade championships, and magic crowns can unleash powerful healing. Even though Alby doesn't think much of his world, it is certainly a delight to read about.