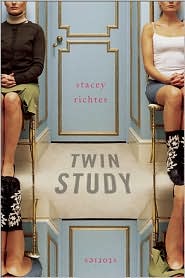 If I were independently wealthy I would buy hundreds of copies of Stacey Richter’s short story collection Twin Study so that I could pass them out to people who claim to not like short stories or not to read them.

“Here,” I would say. “Read this and then tell me how you don’t like short stories.” I am convinced this collection would win them over.

I read Richter’s first collection My Date with Satan after falling in love with one of her stories collected in the fan-fucking-tastic anthology, The Best of Tin House. The collection left me a little disappointed. While it was long on great, great voice, it seemed a little short on actual story.

The highest praise you can give a short story is when, after you finish it, you sigh to yourself and say, “holy shit that was awesome.”

I did that after reading the first story, “Twin Study,” about a set of 30something twins who only see each other every four or so years when they meet in California as participants in an ongoing study. The story was all kinds of awesome about siblings and identity and fleeing your problems.

And it only got better from there.

There was “Christ, Their Lord” about a Jewish woman and her boyfriend who buy a house in a weird Arizona subdivision that get’s really crazy around Christmas time. We’re talking, blocking off the streets so people can gape traffic-free at the displays each home sets up kind of crazy. Oh and there’s also a weird batboy who lives next door, a 30something dude who lives in a shack behind his parents’ house where he spends all day smoking pot. At one point in the story the main character claims that you can just tell the entire inside of the shack is covered in semen. So gross and so awesome at the same time.

Then there’s “The Cavemen in the Hedges” about a couple who live in a town that is plagued by cavemen who have appeared due to what may be a rip in the time space continuum over by the Pizza Hut. The cavemen are a pain in the ass and attracted to shiny beads and My Pretty Ponies and if you actually come into contact with them it’s kind of an euphoric experience.

I want to go on and one raving about each, individual story. About “Land of Pain” and how people who live in pain try to use brainless clones to give them hope. Or “Blackout” about the nerdy girl who goes on spring break and has to deal with a roofied up sorority girl and a lech.

Then there’s the story I forgot the name of about the punk rock sisters in Salt Lake City and their alcoholic mom.

There’s just so much awesome in one little collection.

And what makes it awesome is that Richter has such a command of voice. This is one of those writerly things that is hard to explain to non-writers but is instantly recognized by readers. Voice is the character that gets so far inside your head they start to narrate your inner monologues. But, like I said, a good story has to have more than voice. And this time Richter has it.

The stories are touching and odd and the kind of good literature that sticks to your ribs and makes you so happy that you read something so worthy of your time.