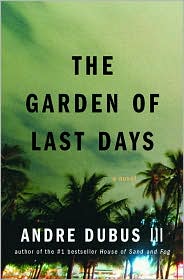 After awhile, I became convinced that Andre Dubus III was doing this on purpose: Oprah-endorsed writer pens insanely long and boring novel filled with the minutia of 5-7 strangers whose path’s intersect one dramatic night at a titty bar in Florida.

April, a single-mother slash stripper who goes by the name “Spring.” But she’s not a dirty stripper, she’s a wholesome stripper, investing in her future; Jean is April’s landlord, who frequently babysits April’s daughter Frannie; Lonnie is a bouncer at the club. He’s got it bad for April; AJ is what his mother would call a “good boy” who frequently makes bad decisions; Bassam is a naughty terrorist hanging out at the club, torn between titillation and self-loathing, in the days before he will hijack an airplane.

April is forced to bring three-year-old Frannie to work when Jean gets laid up with a panic attack. The stripper plops the kid in a back room with the club’s den mother and mermaid movies, then does a show. She snags Bassam, thick with cash, who requests VIP treatment in the back room. Mostly he just wants to talk and touch her C-Section scar, and throw hundos at the stripper. In the meantime, AJ has been kicked out of the club for touching a dancer, his wrist broken for the infraction. He’s pissed, filled with Wild Turkey and beer, and trying to change some of his recent bad luck. He finds Frannie wandering around in the parking lot and takes her with him. He convinces himself that he is trying to save her from what is obviously a horrible home life with that bitch of a mother.

This is just a strange combination of characters, with two plot lines that could not be linked except that Bassam happened upon April’s strip club. Most of the action involving April-Frannie-AJ ends, and there is still a hunk of book left, which means now we’re just waiting for Bassam to do his thing — which is obviously no surprise at all. And when he does, it’s very subtle and anticlimactic. A lot of this reads like the notes a writer would take to familiarize himself with his characters. The stuff that should be hidden in the closet when the guests come to visit.

I’m not sure what this book is supposed to be. A post-9/11 novel? A Lifetime Original Movie about a young stripper who’s just trying to make a better life for her baby? Or why Dubus attempted to make it both. The more-interesting story is the relationship between April, Frannie, and Jean. The Bassam stuff is okay, as he battles his natural urges in hopes for maintaining some sort of purity. Together, it’s like a strawberry and olive sandwich.