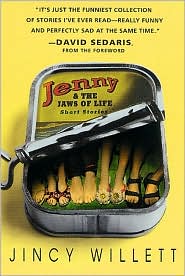 I have an unrequited beef with Jincy Willett that dates back to weeks ago when she wrote in the NYT’s Book Review that Sarah Dunn’s flaming piece of chick lit Secrets to Happiness was not, in fact, chick lit. This, of course, led to me researching the reviewer to find ways to extract from her the $23.99 she owes me for lying. Unfortunately, when I can across her own list of novels and short stories, I was surprised to find that Willett’s stuff looked like stuff I might want to read.

With her most recent novel The Writing Class in that awkward pubescent phase where it is about to morph from hardcover to soft cover, I wasn’t able to find it at any of my local bookstores. I did find Jenny and the Jaws of Life, a short story compilation from the 1980s, re-released in modern times to include a testimonial from David Sedaris on the cover. I was all “Game on, Jincy.” [What a great name, by the way.]

She redeemed herself. Tenfold.

These 13 stories suggest that Jincy Willett knows people better than people know themselves. She has an eye like a microscope fitted with a camera and shoved into a colon. She writes about those moments where you think you are just tugging a loose thread, but it inadvertently cause a school bus crash. Her voice is quietly satiric and darkly funny. If you had lunch with her voice, split the bill, ran some errands and then made dinner, it would take until you were dicing the onions to finally wonder: Wait. Was she making fun of me?

My favorites included “The Haunting of the Linguards,” the story of that perfectly-synced, super-human, couple, whose relationship crashes after the woman sees a ghost, resurrecting the only argument the couple has ever had. “Melinda Falling” starts with a man observing a woman as she takes a tumble down the stairs at a party, and immediately falls in love with this imperfect klutz; In “Under the Bed” a woman’s response to being raped doesn’t match the way her friends think she should respond; “Mr. Lazenbee” stars a socially awkward sixth-grade girl who thinks the wrong things are funny. She accuses her aunt of making her “feel funny,” calls a hotline when her dad spanks her, and tries to seduce the school janitor. This is uncomfortably squirmy brilliance.

“The Best of Betty” was the story that really made me realize the quality of what I was reading. It’s a take on the advice columnist — Ann Landers, Dear Abby, whoever. The story is comprised of letters and responses. At first I was like “C’mon, Jincy, you can do better than this. These letters are blah.” But then, but THEN, you realize that they are blah on purpose. That she is getting to the tired minutia of these columns. And then everything explodes.

I’d say all is forgiven between Jincy and me.