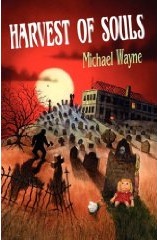 Harvest of Souls by Michael Wayne takes place in a small town in Minnesota. Jeremy is a typical high school kid who doesn't quite fit in and gets teased and picked on by the popular crowd. For years he has had a secret crush on Tori, who happens to be the girlfriend of Ben, the high school football star. One day Jeremy finally gets up the nerve to ask Tori to a Halloween party that he is having out at an old rundown building on the outskirts of town. When Ben finds out about it, he is not exactly thrilled and lets Jeremy know about it in front of the entire school. Jeremy is humiliated and Tori feels awful about it. They strike up a friendship behind Ben's back. Tori talks Ben and his friends into attending the Halloween party. They are actually having a pretty good time there when Ben's jealousy gets the best of him and through a series of unfortunate events, Jeremy is killed.

Fast forward twenty years and you have their children growing up in the same small town. Over the years rumors have been spread around town and Jeremy is blamed for all of the events of that fateful night. One night Eve, Ben and Tori's daughter, goes to the town cemetery with some friends to have a little fun and they try to contact the ghost of Jeremy. That seems to trigger something in the town and one of her friends is brutally murdered. Why has that happened? Will the killing continue? Who will be next? Will the police be able to find and stop the killer, if they can indeed be stopped?

There were just a few minor things I didn't like. First, the author uses the character's names all the time. For instance, there is one chapter almost entirely about Eve, and it is almost always Eve this and Eve that. I would have been fine with she this and she that, I know you are talking about Eve. Maybe that is just something that was annoying to me. During the transition from the first part of the story to the second, he uses first and last names for a long time. It was helpful right away so you could figure out how this new generation was connected to the previous generation, but it went on too long. Second, the artwork left a little to be desired. It wasn't really something that grabbed me and if it was sitting on a shelf, I am not sure I would have picked it up. Lastly, I was disappointed that there was not an “about the author” section in the book. I would have loved to read a little about the author's background; where he's living, schooling, jobs, family, etc. I do know that Michael Wayne lives in Minnesota, but that is about it.

I didn't know what to expect when I started reading this and just hoped it would be a quick entertaining read. I was very pleasantly surprised. It indeed was a fairly quick and very entertaining thriller/horror/mystery book. There were many twists and turns and little surprises that I did not see coming. There were points in the book when I thought I had it all figured out and could telegraph what was coming up next, and then I came to find out a chapter or two later that I didn't have a clue. It was fun.