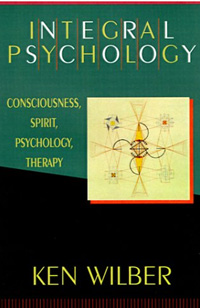 Ken Wilber's Integral Psychology is one of his early writings concerning integral studies, the way of understanding the human experience through a universal or holistic framework. Wilber's integral theories are made up of four corners of human experience-mind, body, soul, and spirit-and the interconnection between all of them. Wilber's goal in this book is to “honor and embrace every legitimate aspect of human consciousness” (2). The way to do this, in Wilber's opinion, is to systematically integrate all the positive insights and helpful teachings from premodern, modern, and postmodern sources of psychology, philosophy, and theology.

Throughout Integral Psychology, Wilber's four corners are referred to as the Great Nest of Being, an indication that a person's integral development is not horizontal or linear; it is three dimensional and moves on several different lines in many directions. To aid the reader in understanding his thick academic writing, Wilber offered numerous charts and diagrams that illustrate this Great Nest of Being. Wilber's insistence on showing these diagrams really drives the point home about human development being a multi-axis affair (X, Y, and Z, if one is familiar with the Cartesian coordinate system).

Wilber's great fear (shared with many including myself) is that therapists and academics will only consider a flatland existence, a place where “meaning and significance are collapsed into valueless facts and meaningless surfaces-'a dull affair, soundless, scentless, colorless; merely the hurrying of material, endlessly, meaninglessly'” (75). Calling these tactics reductionist, Wilber recognized how many modern and postmodern psychologists and scholars set aside thousands of years of religious and philosophical teachings in favor of purely scientific methods and theories. A better way, in Wilber's view, is to integrate the best of premodern, modern, and postmodern teachings from all sources to aid in human development, therapy, and understanding.

Most of Wilber's writings can be put under the umbrella of integral theories and ideas. It is easier for me to think of them as contextual, as Wilber himself indicated in several areas of the book. As a student of theology and philosophy, I was educated to always consider the context of everything. The main idea I took away from my only social work course in college was to always consider these four perspectives when dealing with people: biological, psychological, social, and spiritual. For Wilber, it is mind, body, soul, and spirit. In my opinion, the similarities show the strength and necessity of integral and contextual thought.

Whatever way they may be labeled, it is clear that embracing the whole context of everything is necessary to understand and help humanity advance. Looking at all things with an integral framework is difficult and takes considerably more effort and time than only considering only a portion of human existence. However, failure to consider the context can be deadly. Consider the deadly mistakes of the Iraq War as an example of failing to think integrally or contextually.