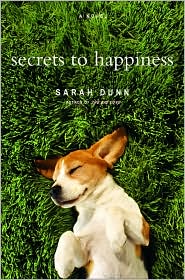 I’m not sure why I thought a book about a single woman writer living in Manhattan wouldn’t be chick lit, since most chick lit begins with those very same ingredients. It’s kind of like taking ground beef, adding orange powder, serving it in a hard shell and saying “But it’s not a taco.”

But in Jincy Willett’s review of Secrets to Happiness in the NYT’s Book Review, she says point blank: ” [Secrets to Happiness] was definitely not written just for women, no matter how it's packaged. True, the protagonist is female, the setting is Manhattan, and the focus is on relationships – and there's a big shopping scene. True, mostly women will read it. But then women are the ones mostly reading every?thing. Besides, it's not about shoes. And the shopping is for books, at the Strand. Also, unlike chick lit, chick TV and chick movies, Secrets to Happiness is actually funny.

And I believed her because she writes for the NYT’s Book Review, which means that reputable writerly people accept e-mails from her, and they probably wouldn’t call security if she walked into their office.

Granted, I wasn’t expecting The Great Gatsby, but the cover suggested at least Tom Perrotta, so I bought it.

Holly is a recently divorced 30-something TV writer, one-time novelist living in New York. She has recently begun a no-strings-attached relationship with the 22-year-old younger brother of her friend. She adopts a dog with a brain tumor. Her best friend is in the early stages of consummating an affair with a hamburger-eating Buddhist. Holly’s exboyfriend — the one who is a barely disguised character in her only novel — has recently been busted cheating on his long-distance girlfriend, and said long-distance girlfriend calls Holly to flesh out the situation. Holly’s friend Betsy keeps hearing she is too old for a) her job; b) men in her age group.

The short chapters star different voices from the handful of characters, and by different voices I mean the same voice with a different name or gender and a lack of depth. Each is sorta droll and sorta neurotic, and the scenes are like episodes from a collection of ” … guess what happened to me … ” stories. The least-interesting character is, ironically, Holly. I laughed twice, once at a joke about what kind of a person rapes people at 7 a.m. [“I mean, who’s in the mood to rape another person at that time of day?” said Holly. “I can barely put my contact lenses in.”]

Um, Jincy? I’m not sure what Devil-Wears-Prada-Lipstick-Jungle-Bitter-Is-The-New-Black books you’ve been reading, but this is chick lit.

So. What’s wrong with chick lit? In this case it’s lazy, cliche-laden drivel that is actually insulting. When a male character lands a blind date with a heavy-set woman, he immediately checks out for the duration of the date and gets drunk. When he touches her shoulder, it is like “grabbing a deboned chicken carcass.” While furthering his role as the asshole of the novel, the intrinsic autobiographic nature of most chick lit leads me to believe that on some level, the author is an asshole, too. Meanwhile, Betsy is repeatedly asked out by a chunky dude who works at her gym. She finally agrees to go out with him, and in the course of the date decides that she guesses it is okay to like him even though he is fat. And this is written as though it is a moment of growth.

Largely, I think chick lit is written by women who don’t like men or women very much. Saying this probably makes me sound like someone you don’t want to invite to a party, but I assure you I’m fun.

I prefer to not read it because it isn’t satisfying to me. Which is weird, because I’ve never seen a Lifetime Original Movie that I didn’t love.