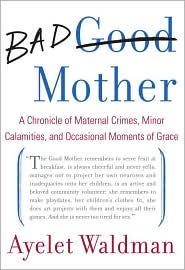 According to an informal Gawker poll, Ayelet Waldman and Michael Chabon have received the second-most votes for literary power couple that make Gawker readers wish they had never learned to read. As of today, they are quite a few percentage points behind Jonathan Safran Foer and Nicole Krauss, but they have moved up a spot since Waldman’s book Bad Mother: A Chronicle of Maternal Crimes, Minor Calamitites, and Occasional Moments of Grace went from draft to publication to the shelves. [She claims they are third-worst in her parenting book that came out just in time to stuff your Mother’s Day stockings with a hardcover mommy blog].

I, of course, disagree with the Gawker findings.

I have a creepy literary couple crush on Waldman Chabon Inc., that started when I found Ayelet Waldman’s old blog, a controversial piece of online real estate where she confessed to all sorts of things that riled up Oprah’s audience. Namely, that she loved Chabon more than she loved her children. We have that in common. I, too, love Chabon more than I love her children. . . granted as soon as Zeke or Rosie or Abe or Sophie craps out a few novels, this is subject to change.

I have no concrete reason for loving this couple. I liked Wonder Boys, Mysteries of Pittsburgh and Kavalier and Clay. And I have liked Waldman’s novels. . . although not as much as I’ve liked the essays on her blog and at Salon.com. She is a sassafras, that one. Smart, loud, oversharing, opinionated, funny, quirky, and contradictory. Together, I have only the image of them that exists in my head. Rooms filled with books, and a Thesaurus tossed like a football between the writers-at-work. Laptops, wine, Sunday newspapers, dinners with gay memoir writers who are so interesting, that they end up vacationing with Waldman Chabon Inc., in Europe.

So, yes. I did a 180 at the teen fiction section and found myself crawling along the baseboards at Barnes & Noble looking for this book, which I chose to read as a memoir instead of a manual. I was hunting for more fodder for the Waldman Chabon Inc.’s romantic Berkley lifestyle file-folder I keep tucked in my brain. [Michael enjoys antique shopping. Ayelet is bipolar.]

Bad Mother is 18 chapters of anecdotes and the lessons Waldman has learned in 14 years of raising children. There is a charming story of how they met [blind date], and there is the skimmable story of how Zeke was diagnosed with ADHD [Waldman freaked.] There are stories about how Waldman lost her virginity when she was 14 [to a 20-something. A one-nighter!] and there are stories about trying to get poor Abe to breast feed. [She didn’t].

There are enough controversial stories to keep Waldman’s haters content that they can still hate her: a second-trimester abortion based on the potential that the baby would be developmentally disabled; a bag of condoms left high on her childrens’ bathroom shelf; continuing to medicate her moods throughout her final pregnancy.

And there are plenty of reasons for childless fangrrls reading a parenting book as memoir to bust a vessel after a vicious eyeroll — the way you would if a friend or family member spoke passionately about something that happens in that foreign land called the playground: Waldman calls her childrens’ gym teacher to complain that they are playing dodgeball. But since I’m the one calling this a memoir, and she’s not, I can’t impose my memoir standards.

At her best, Waldman manages to talk parenting within the frame work of fun anecdotes: Her two best essays are about 1) Why she hopes her son is gay; 2) The deep-loin crave for a fifth child. There were enough little Waldman Chabon Inc. lifestyle nuggets to meet my needs.