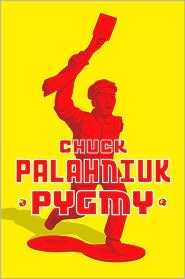 Do I dare say that Chuck Palahniuk is back? I mean, not quite Fight Club back, or Choke back. But at least Diary back, and that was the novel that got me to join Team Palahniuk in the first place, so it’s a start. Especially after the grueling, repetitious, obsessive-compulsive, list-of-porn-movie-titles disaster that was Snuff [which I ranked among the Top 3 worst novels I read in 2008].

Pygmy is fantastic social satire: Portrait of suburban Americana, through the lens of a foreign exchange student, sent here with a teen-aged posse of other foreign exchange students to perform the opaque “Operation Havoc.” Pygmy settles in with a typical American family: chicken-faced mom, Viagra-breath dad, pig-dog brother and cat-like sister. They welcome his visit with the gift of a too-large Jesus T-shirt, a promise to fatten him up, and a grand claim:

“We’ll make an American out of you, or swear to our Lord almighty God, we’re gonna die trying.”

A few minutes later, Pygmy is raping the school bully in the “spa” [read: men’s bathroom] at Wal-Mart.

Pygmy goes from maligned freak show, to hometown hero when he kills a school shooter at a Model United Nations event in the school gym. He becomes the first-pick for dodgeball in gym class, and a science fair wizard. And when he is attacked by his fellow operatives, who resent his public profile, the high school girls think the attack is an elaborate collection of new dance moves and make a protective circle around him.

Pygmy occasionally includes, for official record, how he came to be this young terrorist. A process that included getting 100 percent on a test, being told his family was dead, learning American slang, and learning combat techniques such as “flying giant stork death kick.” Some of these maneuvers are illustrated on the back of the book by faceless, red terrorists in a way that is reminiscent of yoga manuals from the mid-1980s.

The most impressive thing is that this story is told in a language that Palahniuk seemingly invented. Stilted, literal, anti-intuitive collections of nouns and verbs and adjectives. These are sometimes confusing, but always worth the effort of decoding. [The price of decoding is that you may find yourself talking to yourself in this language whenever you set the book aside.]