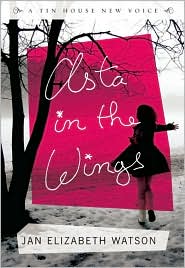 Asta in the Wings is a remarkable story about how a seven-year-old girl dealt with life after both her and her brother Orion became separated from their mother. The first published novel by Jan Elizabeth Watson, Asta in the Wings takes on a complicated world of isolation and separation from Asta's young point of view. It also explores the dynamics of the parent and child relationship, especially when that relationship is challenged by a psychological condition.

Asta and Orion were isolated from the outside world by their mother, who suffered from mental difficulties. One day, mother did not come home and the children ventured outside for the first time to find her. Since both children were sickly and the season was winter, the search was futile and they both ended up in the hospital. The mother was eventually found and subsequently sent to a mental hospital. The children were moved to different places: Orion went to live with a local doctor and Asta was sent to an Aunt on her dead father's side. Thus began Asta's new life as a young girl in a strange house separated from the only family she has ever known.

One of the most difficult things an adult can do is go back to childhood and see life as a child does. As a parent, I often have to check myself to ensure that I understand what the children are experiencing in their lives. Knowing how difficult this is as a parent, I am sure it is just as challenging for a writer to go back to that place and have those experiences come through in their writing. Watson did a marvelous job at doing just that: making the reader remember how they felt as a child. Asta's insecurities and fears about being thrown into the world without her mother and brother were effectively conveyed in Watson's writing.

Here is an example of this understanding. After venturing out of the house to look for their mother, Asta and Orion found their way on to a school bus in an attempt to find someone who would help them. Unfortunately, they did not get off the bus with the rest of the children. Both were stuck in the back seat of an empty bus.

We were so absorbed in watching the plane that we failed to notice the driver's approach, and when the bus door reopened and his footfalls sounded on the steps, neither Orion nor I was prepared.

It would have been easier, perhaps, if we'd given ourselves up then and there. To this day I cannot say why we did not-why we could not. But we were children, and frightened; for children that is reason enough. (123)

Asta in the Wings made several unexpected plot changes that enabled a book to be something new, albeit one with an abrupt ending. However, I was interested in such a way that it kept me eager to keep reading and wanting more.