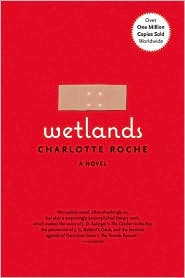 Congratulations, Charlotte Roche. Wetlands is officially the least impressive book from the most-hyped category that I have read in recent history. I’m embarrassed that I got sucked in by the chatter: the fans fainting at readings, the “most controversial . . .” plaudits, and the promises of shocking prose. I actually lifted my hungover body off the couch to immediately drive to a bookstore.

Now, the only good thing I have to say is, at least it only took three hours to read.

The novel is set in a hospital where Helen is about to have surgery on her butthole after a shaving incident. While she is laid up, she decides this is a good time to get her divorced parents back together and she plots how she can use said butt injury to her advantage. In the interim, she thinks about her life and all the sex she has and that time she got so high with her friend that they actually drank each other’s puke because some of the pills they had popped went undigested. And she has a crush on a nurse that begins when she asks him to photograph her wound after surgery.

Helen wages a personal war against the tampon industry by making her own, and in fact leaves one of these crafts behind in the elevator of the hospital. Helen also likes to eat her own scabs and snot — and all sorts of other things not found on any sort of menu.

Where to begin. Where. To. Be. Gin. First of all, Helen is an awful character. She is manipulative and immature and a sociopath. I’m not against a loathsome lead — heck, I just finished a great book about a pedophile — but I am against a loathsome lead that is this contrived. Helen is shocking for shocking’s sake. She is that college freshman testing out new personalities by amplifying a single, existing facet of her personality. She is Helen: Anal-sex having, booger eating, and hygiene-hating. Don’t like her? Well, that probably means you aren’t a feminist. [Insert sarcasm here].

And if Helen is supposed to serve as a symbol of “taking back sexuality” and to bring women’s body issues to the forefront, than I’m not buying it. Being sexually adventuresome is not some sort of fast-track for fem-street cred. A character championing more positive body issues wouldn’t hang out with a dude who just wants to shave her.

Not to mention that Wetlands is so poorly written that it shouldn’t be allowed to make any sort of statement about anything. [Although, this may be the fault of the German to English translation. Perhaps Roche never intended to use the word “pussy” upward of 50 times].

First learn to walk; then learn to run.