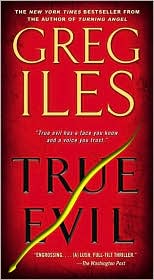 I read a book by Greg Iles a couple of years ago and liked it (The Footprints of God). So when I was looking for a book to read I came across True Evil and I thought it would be fun.

It begins with an FBI agent, Alexandra “Alex” Morse, losing her sister to cancer and on her death bed she tells Alex that she was murdered by her husband. What?!??! How could that be if she is dying of cancer you ask? It’s simple really. Someone injects her with a virus and she dies in a few months. She must avenge her death!

Her sister’s husband, Bill, doesn’t want to be married to her any longer. He contacts a lawyer, Andrew Rusk, to see what his options are. Bill stands to lose a large amount of money going through a divorce and would also probably lose custody of their son and along with him another chunk of money. His lawyer sees him in so much internal struggle with the prospect of losing so much money, that he offers to have his wife killed for much less. . . and nobody will ever find out. You see, this lawyer is in a partnership with a very smart doctor, Eldon Tarver, who has found a way to inject people with a virus that if not cured in three weeks, he is the only one who can cure it by the way, will induce some form of untraceable blood cancer and the person will die in twelve to eighteen months.

Alex has found a link from Bill to Andrew and suspects he must be part of this foul play. She does a little research and finds out a good portion of Andrew’s clients’ spouses have died of cancer. Weird. Then she sees a woman visit Andrew’s office. She finds out who it is and realizes that this lady’s husband must be the next victim! She confronts him, Dr. Chris Shepard, and they get entangled in a very long, drawn out process of finding out who this lawyer is, who he is working with, and why they are killing people and getting away with it.

Actually, Alex’s process from start to finish is only about six weeks or so. It seemed like a lifetime. When things were moving, they seemed pretty good. Then BAM, you have just read ten pages having nothing to do with anything. The author seemed to like to talk about the same things over and over without adding anything new. I get it, lets move on now please. For instance, Alex was a hostage negotiator for the FBI, and to make a long story short she made a mistake and a fellow agent who loved her died for it. That’s really sad, but I get it. I have no problem at all if they reference that throughout the story here and there, because I am sure it was traumatic and it is a part of the woman we see before us today. It seemed like he retold that part of the story four times. I already know what happened and I can imagine the effect it had on her, PLEASE MOVE ON.

I actually like the premise of the book, that’s why i started reading it. It’s a cat and mouse kind of game with some really smart people trying to outsmart each other. Money, mystery, intrigue, sex — what is not to like? The book was over five hundred pages long, and it seemed about 1/4 of every chapter was worthless, drawn out regurgitation. It made me tired. It was an ok book, and it may have been a pretty good if it were about a hundred pages shorter.