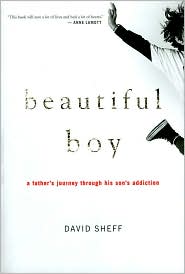 I put off reading this book because the double marketing reeked of self promotion. For those who don’t know, David Sheff and his son released two memoirs about his son’s addiction to crystal meth at the same time. They received quite a sales push from Barnes and Noble, Starbucks, and did I hear they were on Oprah as well? So I avoided them.

This spring I grabbed Beautiful Boy on my break and got into the beginning. I decided to read it with an open mind. Then my mind closed about half-way through this too-cool-for-school dad’s diatribe about addiction in America.

David Sheff wanted to do everything right in the beginning. He wanted to listen to Nirvana with his son. He wanted to heal the scab of divorce that was inflicted when he and his first wife separated. So he tried to be Nic’s best friend. He took him surfing. He put him in the best schools. It seems to me that he set no boundaries, for example, he felt okay smoking a joint with his then fourteen-year-old son who had already been caught with pot.

This book seemed aimed and pointed at an upper-middle-class generation that has no clue about crystal meth and addiction and rehab. How can a parent not be aware of the problem of crystal meth? Sheff explains it, but it’s too late. Nic is addicted and I am already sick of all the rehab stories.

Sheff is a capable writer, but he seems to be reaching as he inserts popular culture references that might seem cool to his kid’s generation. Beck, Nirvana, Wes Anderson films, Little Miss Sunshine. I get it. He’s hip with the vernacular. I ended up skipping over parts.

I can envision this as an adequate memoir to reference for any parent who knows absolutely nothing about addiction or the state of rehab. I hope Nic stays sober, but I’m not going to read his book. At least his dad got a best seller out of it.