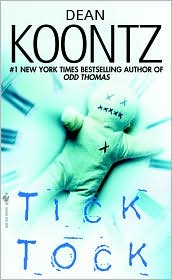 This is my first official book review, so bear with me. . . Most books I read require little thinking and I choose them so I can basically get lost for a while. I enjoy fun characters and I like when I get hooked into them along with the story. I have read lots of Dean Koontz books in the past, and really enjoyed Odd Thomas, although the rest of the series lacked the punch the first book did they were worth the read because I got hooked on the main character. Most of Koontz’s books have some sort of supernatural or paranormal things going on, and this one is no exception.

Tick Tock starts out with a Vietnamese-American writer, Tommy Phan, who is struggling with his success while trying to convince himself, and his old-world mother, that he is not turning his back on and ignoring his heritage. He has just quit his job at a newspaper to be a full-time writer and had enough money to purchase a brand new Corvette, which is his childhood dream. Everything seems to be falling into place the way he wants them to when he gets home and finds a rag doll on his doorstep. He brings it into his house and that’s when it all starts to unravel, figuratively and literally.

The doll splits its seams and out pops a little demon kind of thing which tries to kill Tommy after typing on his computer screen THE DEADLINE IS DAWN…TICK TOCK. Running, chasing, hiding, more running and chasing…a little tiresome at times. Actually, it was a lot tiresome.

Around a hundred pages into this book, which was only released in paperback because of its total length of 335 pages, I thought about closing it up and putting it on the shelf to maybe continue another day, or maybe not. I don’t mind some supernatural stuff going on in books, but I’d like it to be at least a little bit plausible. Slightly plausible is usually enough. I can make a leap as well as anyone reading a book to believe for the time being and trust things will be explained in due time and start to make sense. The explanation of this creature and its origins does not take place until you have about forty pages left of the book. That’s way too long to just take it for what it is without any explanation or even clues so that you may deduce for yourself until it is finally revealed.

Thinking back, I don’t recall any clues, save for the note in Vietnamese pinned to the rag doll on the doorstep, that lead you to make any sort of jump for yourself. As a matter of fact, Tommy tries right away to get the note translated since he is not fluent in Vietnamese. He tries a buddy at the newspaper. He tries his brother. In the end, you never even learn what the note specifically said.

What saved this book from the shelf was the introduction of the female lead character, Deliverance (Del) Payne. I know. The name is as crazy as she is. She picks Tommy up on the highway after the “doll snake rat-quick little monster thing” blows up his new Corvette. The interaction between Del and Tommy made me chuckle a few times. Tommy never seems to know what Del is talking about, and she loves it. They fall for each other, surprise. They could have just as easily hated each other and been forced to get through this together and once the ever-growing monster is dealt with they could each be on their own way. Both of their mothers add something to the story too and the conversation between Del and Tommy’s mother, who hates pretty blond girls because she thinks they are trying to steal from her, is pretty funny. I could almost hear them bickering back and forth.

The premise was a little too far out there, even for me and Tommy seemed naive and dumb, but Del was great and salvaged the story. Koontz should have written the book around Del instead of Tommy and possibly could have had a series of books with her as the main character. In his defense, if you can defend a giant of his stature, he writes a note to the reader after the final chapter. He started writing this book and hit a wall and decided to put it aside while he wrote Intensity, which I have not yet read. He labels this as a screwball comedy thriller. I don’t know if I would go that far. It was certainly cute at times, but it lacked much of the thriller aspect. When the action was moving fast and keeping a good pace, I found him stopping to take a few paragraphs to describe something I cared nothing about and that really slowed down and unnaturally broke up parts of the story. It seemed a little cumbersome and forced at times. I suppose it’s nice that since he thought the story wasn’t long enough to release in hardcover that he chose not to and only released it in paperback so the die hard fans wouldn’t have to spend hardcover prices.

All in all, I wish the first third of the book wouldn’t have been so lame, not that the last two thirds were all that great. Tommy is not a character that you will get hooked on. Del could have been. Did this book suck? I don’t think so, but it was close.