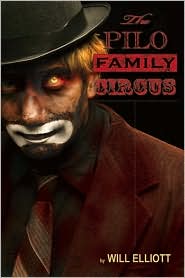 If I learned anything from The Pilo Family Circus by Will Elliott, it is that you cannot trust the Internet to tell you if a book is good. According to my research, this will be the first negative review of a book that won all sorts of weird Australian awards for fiction, and earned a blurb, through no fault of the author — I understand — likening this novel to the works of David Lynch and Chuck Palahniuk.

I’m here to tell blurbologists that just because a writer smears feces on a wall doesn’t make him anything like Chuck Palahniuk.

In fact, this is exactly the sort of book that shouldn’t be reviewed by anyone. It’s not worth it. It is the equivalent of a stack of trade paper copies with the title scrawled in lipstick, featuring a high heeled shoe as the main art on the cover. There is nothing satisfying about this story: it is disjointed, poorly written, the plot fails and the writer relies on some elementary school style transitions (“Unbeknownst to him, these were the last eight hours of peace he would have for quite some time”). Not to mention the inexplicable perspective changes, and lack of distinguishable voice.

In fact, the only reason I didn’t stop reading after forty pages was because I was eager to find out exactly how bad this book could be. Answer: Pretty awful. Every time I set it down, I forgot what was going on when I picked it up.

It’s about Jamie, a dude who is basically living in frat boy-style squalor, sharing a crumbling home with some nonfriends. In the middle of the night, he has an interaction with some clowns, which eventually leads to him taking a role in this otherworldly circus filled with freaks and carnies and a man with a fish face. He is stuck there, after he is shown that the alternative — his old life — will never amount to anything. Meanwhile, his body is splitting time: sometimes he is Jamie, sometimes he is JJ, a clown prone to havoc. Blah blah chaos.

I have to admit that I feel a little bad dissing on this book so seriously. Obviously these are words made by someone who had the fortitude to get them into print with a pretty awesome cover and a foreword written by Katherine Dunn, a natural pick considering the circus premise. For that, Elliott gets a kudos. You did it, man. Unfortunately, I neither laughed, nor was I frightened throughout the course of the book. I couldn’t distinguish characters from each other and a lot of the time I barely understood what was happening.