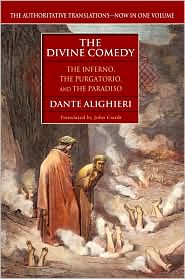 Reading The Divine Comedy took a lot out of me. I feel like I accompanied Dante on his journey through hell, purgatory, and heaven. There is so much meaning and information packed into these poems that I needed to take notes just to keep things straight. Even doing that, I missed so much that several readings of Dante's journey are necessary before I can begin to feel confident in my ability to grasp everything that is loaded into these pages.

I do not even know how to begin a review of The Divine Comedy. I am willing to bet there are many people that spend a significant portion of their lives studying Dante. The translator of this volume, John Ciardi (1916-1986), was both an etymologist and a poet during his life. He was also a Virgil-like guide for me during my initial read of Dante via his brief previews featured at the beginning of each Canto and his rather detailed notes at each Canto's conclusion.

Since I am not a Dante scholar by any means, I am unfortunately forced to reduce The Divine Comedy into smaller summary pieces to help begin some sort of elementary analysis. One day, Dante concludes that his life has strayed away from the straight road and ended up in a dark wood (16). Thankfully for Dante, God sent Virgil to guide him through Hell and Purgatory, where Beatrice (the symbol of Divine Love) then takes over in the ascent through Heaven. In an extremely graphic and Catholic journey, Dante met many of his fellow Florentines and other notable figures in world history.

The Divine Comedy is like a who's who of history up to the 1300s and where they ended up in the hell/purgatory/heaven matrix. A work predating the Reformation, The Divine Comedy is a product of the time when the Catholic Church was at the peak of its power in Europe and swirling in corruption. Dante loathed this corruption and it showed in his writing. Hell was filled with corrupt popes, while heaven featured some of the biggest names in Church history: St. Peter, St. Thomas Aquinas, St. Bernard, and St. Francis to name a few. In typical pious Catholic style from that time, Dante assigned those he believed to be heretics to hell, including Muhammad, the prophet of Islam. Virtuous pagans like his guide Virgil, Socrates, Plato, and Seneca were forever encased in the first circle of hell, also known as Limbo, where they did not suffer torment and punishment but were not able to ascend to heaven since they were born without knowing Christ's revelation.

As with all works, I needed to keep a perspective as to the time, place, and context The Divine Comedy was written. This perspective is helpful because Dante's theology was medieval, Catholic, and is radically different from my spiritual world. However, I can appreciate Dante's ability to create this world using poetry. I offer just a glimpse of his art here. Dante and Virgil were in the eighth circle of hell, just one level above Satan, and looked into the pit that held the souls of flatterers.

Once there, I peered down; and I saw long lines
of people in a river of excrement
that seemed the overflow of the world's latrines.

I saw among the felons of that pit
one wraith who might or might not have been tonsured-
one could not tell, he was so smeared with shit.

He bellowed: “You there, why do you stare at me
more than at all the others in this stew?”
And I to him: “Because if memory

Serves me, I knew you when your hair was dry.
You were Alessio Interminelli da Lucca.
That's why I pick you from this filthy fry.”

And he then, beating himself on his clown's head:
“Down to this have the flatteries I sold
the living sunk me here among the dead.” (145)

Yikes. This is a tiny portion of what is contained in this long journey. I could easily write volumes about this book. I think I need to let it all settle before I give it the second (and probably third) reading it deserves.