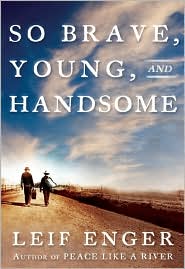 Leif Enger is one of those Minnesota writers I’ve always wanted to read but never got around too. Part of the fear was the old-timey western sort of themes that seem to run through his books. I’m not an old-timey western kind of girl. But you know, sometimes it’s good to branch out from your comfort zone.

I’m glad I took the chance on So Brave, Young, and Handsome, Enger’s roadtrip book about a novelist with writer’s block and a train robber bent on apologizing to the wife he abandoned decades ago.

There’s something charming about older gentlemen taking off from their homes in search of that something missing from their lives. Enger’s book, which came out a year or so before, reminded me of The English Major by Jim Harrison. Both have older men (and by older I mean men past the bullshit 20/30something angst that plagues so many novels) traveling across the country and getting into some kind of trouble.

Enger’s story features Monte Becket, a Minnesota postman turned author who is kind of one-hit wonder. His first book, Martin Bly is a phenomenal success and he spends years trying to follow that up. He doesn’t have much luck at that, so when a stranger paddles by Becket’s house on the Canon River in Northfield he’s looking for something else.

Glendon Hale’s an old guy who build’s boats and once he strikes up a friendship with Becket asks him to accompany him down to Mexico so Hale can make things right with Blue, the woman he abandoned. Becket’s in with the blessing of his painter wife and their young son. The two set out on a train south (oh yeah, I forgot this all takes place in 1915 before the “great war” when trains were a major form of transportation and the telegraph was the main form of communication).

They aren’t very far into the trip when Becket discovers that Hale’s a wanted criminal and he’s being pursued by Charles Siringo, a bounty hunter from the notorious Pinkertons. Siringo has been on Hale’s case for years. The two have a history.

So now we got a cat and mouse game with Siringo always a step behind. Hale manages to slip away and hook back up with Becket and they continue their journey by car, picking up a young desperado named Hood Roberts and hooking up with a kind of western sideshow featuring a female sharp-shooter.

Of course since this is the almost wild west there are shoot-out, horses, floods, and bandits. It’s pretty fun. My only complaint is that Becket starts out as a sort of hapless bystander and eventually gets caught up in the action and becomes a sort of fugitive himself which distracts from Hale’s story, which is much more interesting. The parts of the book that revolve around his quest for grace and forgiveness are the most interesting. Hale’s the real charmer with the dark past and following him is never dull. Sometimes, even though he is the main character, Becket’s side tracks get a little dull and I just wanted to get back to Hale. He seemed to be the character with the most at stake, and in the end when he meets his fate that’s the loose end that feels the most rewarding. Becket, again turns into the hapless sidekick, where he kind of belonged all along.