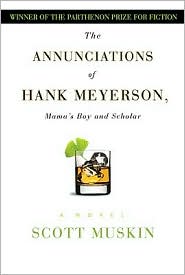 Hank Meyerson is that friend who takes a really, really long time to tell a story. Sure once you reach the end where the awesome is you’ve kind of forgiven him for taking the slow, meandering route, but still . . .

In Scott Muskin’s novel The Annunciations of Hank Meyerson, Mama’s Boy and Scholar, Hank tells us his entire life’s story. Much like most people’s lives, Hank’s life has a lot of really interesting and a hell of a lot of not so interesting. Unfortunately, we get a great deal of both in this book.

It seems only fitting that this novel, much like the main character, is a little self-indulgent. Hank, an overweight, over-educated Jewish boy in a bad marriage, is totally self-indulgent, so much so that he ends up having sex with his sister-in-law and then high-tails it to Montana so as to not deal with the fall out. Bad Hank!

Lucky for us, Scott Muskin is a talented and witty writer. It makes suffering through the not-so-interesting parts bearable, and ultimately, worth it. The last sixty pages are where the awesome is and you’ll feel handsomely rewarded for your perseverance (though, and I know this is mean, I am gonna just say it — you can skim the entirety of Part 2, where Hank has holed himself up in Montana. As far as I can tell this section merely exists to give Hank some place to come home from, a reason to be called home, something like that. And while it’s all finely written, it detracts from the crux of the story. The book would be much, much stronger without these 70 pages).

Anyway, eventually Hank is lured out of his self-imposed exile by his sister-in-law. She begs him to come back to Minneapolis to tend to his brother, Carlton, a former-athlete turned toymaker who has been injured. Hank, of course, returns and once he gets back to Minnesota the books seems to hit its stride.

Muskin packs a lot into these pages, the Meyerson boys’ childhood in Omaha where they converted to Judaism after their drapes salesman father left their mother and she married the Jewish owner of a toy store; the death of Mrs. Meyerson; Hank’s college years at Grinnell where he meets his future-wife Carol Ann; and how Carlton met his wife June (the one Hank has sex with) and came to be seen as some kind of toy-inventing genius. And that’s just the back story, really.

Because the real story here is about these two damaged brothers, how they fell for the same woman, and just how much a sibling relationship can be equals parts love and hate. The dynamic between Hank and Carlton is magnetic in that it repels and draws you in at the same time. Each sees the other as a sort of good-for-nothing favorite child, and each feels like the put-upon, misunderstood black sheep, just like real siblings!

Their relationship is so genuine that as each of their lives unravel and come together in the oddest of manners, you are rooting for both of them even though there is no way for both to win. One of the brothers has to lose, and as they spin toward their tragic fate you know you’re going to be heartbroken no matter what. Nice!

Even with all this genuine emotion, Muskin manages to be pretty funny. Hank has that sort of witty self-deprecation that makes washed-up English majors so attractive. The humor works most of time and doesn’t often get in the way of tenderness (there’s a really beautiful scene between Hank and his not-quite ex-wife Carol Ann involving a Dixie cup full of syrup that’s really amazing), however sometimes it got in the way of my enjoyment of the book.

One of the most charming characters in the novel is a developmentally disabled painter named Terry who June works with, and the fact that they continually call him a retard (and made references to retards) made me cringe every single time I read the word, and they use it a a lot. I am not sure if it was meant to be funny or what. It’s base and cruel, and the characters (and the book really) all seem much too intelligent for the “it’s okay because he’s our friend” justification of their behavior.