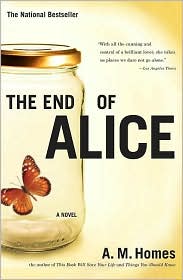 I’ll say one thing for A.M. Homes: She is one brave writer. The End of Alice stars an imprisoned pedophile who has become pen pals with a nineteen-year-old woman who is dabbling in a similar avocation with a boy who is at that in-between age where he wants to see a naked girl, but also keeps a collection of his own scabs for snacking on, aged to create different tastes.

The narrator takes the woman’s words, visualizes the scenes, and gets curious and jealous. All the while, it’s uncertain whether he is inventing this relationship, filling in her blanks, or whether she has dictated the events. At the same time, he is telling about his own lurid past: a mentally unstable mother who coaxes him into providing her with sexual relief while they are sharing a bath, and later his relationship with the twelve-year-old Lolita-esque Alice — the relationship that ends with the loathsome narrator in prison and a submissive in a relationship with another inmate.

This is not a comfortable read. It’s violent and graphic and gruesome. It couldn’t have been a comfortable book to write. The inappropriate relationships are more thorough, more detailed, than a duet penned by Anais Nin and Henry Miller. The characters play complicated roles: Alice is still young enough to enjoy a tea party, but old enough to sneak out and tie herself to the narrator’s bed. Too young to understand menstruation; But with the vocabulary of a woman performing in a curtained cage, switching positions while an ogler feeds coins into the equivalent of a parking meter to keep her in motion.

Is this a good book? Not according to a lot of people. It’s been banned and Homes has been criticized. It has been likened to pornography in the NY Times and given a D in a 200-word write up in Entertainment Weekly. Me? I thought it was fantastic. It feels like I should apologize for admitting that. It is a complicated but well-executed story by a woman with some crazy writing chops. To me, this begs the questions: What makes a book good and why do we like what we like?

I like to read something shocking. I like to think “is this believable?” I like when my mouth hangs open in disgust. I like a protagonist who makes me squirm with hate. [The completely unlikeable protagonist isn’t used often enough.:] I’d say this definitely is not a book for everyone, though. Obviously. Six-to-eight hours is a long time to spend with a vile creature.

There is a point in the story where Homes writes something in the voice of the narrator that feels like she is granting permission to read the book and feel okay about reading the book:

Some might believe that I blither just to shock, but what is shock if not some ancient identification, meaning that I have touched a sore spot, hit a nerve — think on it, you will-and some may believe that I blither to get a rise, and admittedly I’ve done that, too, but it is hardly my goal. True, I get trapped in my tirade, but would assume, would trust that you — being who you are, where you are, out there and not in here — have sense enough not to get caught up in it. I would assume that you are bright enough not to buy the surface of my grotesque but know how to push it aside in order to see what’s really there.”