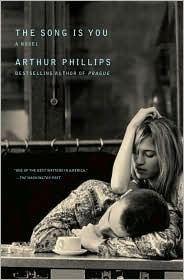 And there I was, minding my own business on a Sunday afternoon, when suddenly I could not put down The Song Is You by Arthur Phillips. It was like I got hit over the head with a love mallet. It had to be, because for the first third of the book I was trudging through Phillips’ metaphor mud, wondering why a character couldn’t just wave his hands. He had to be “waving at the air as if bees were approaching his ragged beard with colonial intent.” Etc., etc., etc.

(As a metaphor abuser myself, I’m especially keen to this infraction in others. Just like I notice other women who have the same bald spot that I’m growing.)

This easy-to-read-in-one sitting novel stars Julian: a middle-aged music fan who is glued to his iPod. He has a genetic link to music. His father can be heard on a live Billie Holiday recording requesting “I Cover The Waterfront,” a moment that changed his life. Now, years later, Julian is separated from his wife after the flukey death of their young son. He’s shopping for toilet paper, but finds himself in a bar listening to live music with kids a fraction of his age. From his vantage point — sitting at the bar, and as an advertising genius — he fills eleven coasters with tips for the young singer on stage, Cait O’Dwyer, an Irish woman two blinks from becoming a pop sensation.

The bartender gives Cait O’Dwyer the coasters, and Julian’s words appear in a song, a vague idea of him in an interview, and his makeup tips in her next live show. Then it is on like Donkey Kong, this wicked game of cat and mouse. He calls her while she is on a telethon, she writes a song inviting him into her apartment and telling him where to find the key. They email, talk on the phone, he goes to her shows. Only occasionally do they ever talk about meeting. But it is understood that they will, soon, when they are both ready.

So what is so big about this book? I have no idea, other than it is so charming. Julian has this socially inept genius of a brother who belly flops in front of the entire country in the worst way as defending champion on Jeopardy! and Julian’s wife Rachel is unglued with grief over their son and the separation. The singer is only interesting when Julian is looking at her. Otherwise, she seems to be looking for someone to tell her who she is and convince her that she is unique. And every time I sensed an annoying plot deviation, Phillips avoided taking the tiresome route I feared he would take. He also either chilled out on the metaphor fest, or else I just became bilingual in his language and it wasn’t so painful anymore.

I don’t know. I just really loved this story.