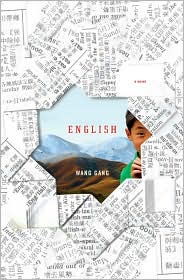 English by Wang Gang could be called a “Catcher in the Rye in China.” If so, let’s hope that it’s not the last offering from this talented author. Originally written in Chinese and translated to English, the simplicity of the language still manages to expose the multiple levels of complexity in the life of teen Love Liu.

Love’s name, along with that of his teacher, Second Prize Wang, and “friend” Garbage Li reflect the Chinese tradition of naming children to reflect current events, social status, and political position. During the recent Olympics in Beijing, many Chinese children were named Aoyun meaning “Olympic Games.” This practice during the cultural revolution gives even more of an insight into the social and political environment of the novel. The naming process is indicative of the impact that even the most minute actions of a family can be informally regulated by blind nationalism.

Love is going through all the angst of a teen growing into adulthood with far more complicated situations to deal with. His father is a semi-disgraced architect, his mother a demoralized wife locked into a marriage that requires a sublimation of her desires, his English teacher carries the reputation of a philanderer, and his downstairs neighbor commits suicide from shame. Teenagers deal with these types of events on television dramas now, but to have Love deal with these as realities under the oppressive judgment of the Cultural Revolution creates an even more traumatizing experience.

Love lives in ?r?mchi, a far western town in Western China. Isolated from the perceived advantages of a larger city, Love resents his lot in life. After visiting a larger city with his parents, he berates them for not having his birthplace be there. As is typical in China, a male son is raised to be the center of the universe, and Love certainly wears this privilege with arrogance.

Initially, he is being taught Uyghur (a Turkish language of the area) by Ahjitai, a beautiful young woman who occupies the fantasies of his developing sexual awareness. Under the Cultural Revolution, however, things change in an instant and English suddenly becomes the language du jour. This means that Ahjitai will leave Love’s life and be replaced by Second Prize Wang, an extremely poor substitute as far as Love can see.

Second Prize carries his own aura that enchants Love. He smells of a semi-feminine “cold cream,” dresses impeccably, and has two pairs of polished leather shoes. Classroom rivalry between Love and the daughter of his downstairs neighbor leads to him finding himself competing academically for attention for the first time in his life. And, this is only the beginning of the story. Following developments that include his parents’ decline and rise in the Party’s favor (a bit of cuckolding helps this along), his teacher’s impending disgrace (one shouldn’t let young female students study in one’s room), and the overpowering presence of the government into all aspects of the citizen’s lives, Love discovers that life is not as easily understood as he would desire.

This book’s style reminded me of Waiting, the 1999 National Book Award winning novel by Ha Jin. The spare writing style of these novels are represented in both author’s works. This belies the complexity of their message; while written in an uncomplicated style, the labyrinth of plot subtleties continues to impress long after the book is finished.

I truly enjoyed this book. I know the novel does not fully delve into the politics of the region, the emotionless position of the Party and the true tragedy of the times but it does prompt a desire for more cultural genres of this type.