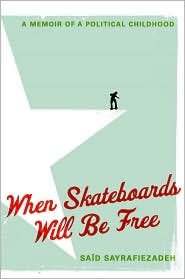 Reading books on an airplane offers a distraction-free environment much like a library. Other than a few pleasantries with the person sitting next to you and the complimentary beverage service, one is free to read non-stop from Minneapolis to Orlando and then back again. In the six hours I was in the air, I dusted off Sa?d Sayrafiezadeh?s memoir When Skateboards Will Be Free with time to start yet another book.

Sayrafiezadeh?s memoir about growing up in an activist household is easily the best memoir I have read in some time. Sayrafiezadeh?s parents were extremely active members of the Socialist Workers Party and this book illustrated how difficult it can be on a child of political activists, especially one with parents that are separated. Sayrafiezadeh lived with his mother in Pittsburgh while his father, brother, and sister left early on to pursue activities within the party. With Sayrafiezadeh?s father living in Iran organizing the party in the midst of the Iranian Revolution, Sa?d?s mother was left to raise him alone within the socialist activist lifestyle.

It was this lifestyle that made the book so interesting. Sayrafiezadeh?s childhood was free of the frills and luxuries enjoyed by most of the capitalists at that time in history (late 1970s and 1980s). Instead, Sayrafiezadeh had to endure socialist meet-ups, conferences, and demonstrations intended to ignite the revolution here in the United States. Boycotts of grapes to support workers in Central America, living in run-down apartments, and dealing with the social stigma of both socialism and his Iranian heritage were commonplace for Sayrafiezadeh.

What made this memoir better than most was Sayrafiezadeh?s ability to tell about him as an adult while also integrating his childhood at the same time. As of this writing, Sayrafiezadeh was working for the capitalist hero Martha Stewart and was trying to work through his relationships with his girlfriend, mother, and father while also making sense of his socialist childhood. As an adult, Sayrafiezadeh has come to some interesting insights.

The difference between us and the other poor families in this neighborhood was that our poverty was intentional and self-inflicted. A choice chased after, as opposed to a reality that could not be avoided. There was no compelling reason for such deprivation. From the secondhand clothing to the secondhand furniture, from the unpaid library books to the unbought skateboard, it was all artifice. We were without money, yes, but we were not without options. My mother was highly literate, well read, well spoken, and she held an undergraduate degree in English literature from a time when many women did not even attend college. Not to mention that fifteen minutes away lived a wealthy brother who had generously helped here throughout the years, had even helped pay her tuition when she had wanted to return to school. There was the matter of the missing husband, who, with some cajoling?or the cajoling of the judicial system?could be pressed into aiding us. (68-69)

As a parent, this book makes me think about how our actions as parents are and will be perceived by our children. For Sa?d, it was the Socialist Workers Party. Will it be the constant pursuit of higher education for my children? For Sa?d, the symbol of his childhood was the multiple stacks of the party magazine The Militant. Will it be the multiple stacks of books and papers for my children? It makes me wonder.