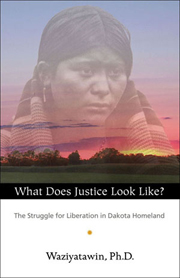 Waziyatawin's 2008 book What Does Justice Look Like? is a book about the struggle of the Dakota people to achieve liberation in Minnesota. Waziyatawin used the occasion of Minnesota's Sesquicentennial to illustrate the need to both recognize the genocide and oppression of the Dakota and to install a policy of reparative justice that would both return land (areas formerly Dakota and now public) and allow the Dakota the freedom to live as they so choose on that land.

In this book, Waziyatawin built a moral case for reparative justice. First, Waziyatawin gave us a well-researched and cited history of how both the United States and eventually the State of Minnesota took land and committed genocide against the Dakota. To begin to right the wrongs, Waziyatawin advocated for a culture of truth telling by both the Dakota and non-indigenous Minnesotans about what really happened when Europeans settled the area that became Minnesota. Waziyatawin then showed the necessity for the removal of Fort Snelling, a symbol of colonization that once was a Dakota concentration camp and a site where Dakota people were publically executed. Not stopping there, Waziyatawin moved forward in this vision and showed both the benefits of Dakota liberation and how all people can live in peaceful coexistence.

I can certainly see how many non-indigenous Minnesotans may feel offended and shocked by what is written in this book. Waziyatawin exposed many disturbing historical details about the Dakota genocide. This history is not often discussed in most elementary schools and museums. What may be more shocking for many are the ideas Waziyatawin has for making things right. Many people cling to their worldviews so tightly that when challenged with reality, they become hostile. Waziyatawin gave several examples of this very idea by showing letters to the editor printed in the Star Tribune.

However, when one is presented with the evidence and reality, the path to reparative justice becomes clear and necessary. I personally agree with Waziyatawin's conclusions in this book. I found these paragraphs among the most powerful in the book.

Our non-Dakota allies can also facilitate the truth-telling process by talking with their families, friends, and communities in support of this project. Allies can share this volume-pass it around or buy additional volumes to contribute to community forums. Allies can contact their local media outlets and encourage them to engage the truth-telling project. To achieve the kind of broad-scale truth telling that will be necessary to reach everyone, we have to tell, relentlessly, the story of genocide and ethnic cleansing. The difficulty of this should not be underestimated. It is emotionally and spiritually exhausting to dwell in such a difficult space. In addition, many non-Dakota people may become overwhelmed by the information and consequently believe they should not have to hear about it more than once. However, in order to move on to the phase of action, we all have to contemplate deeply the implications of this history, understand the magnitude of the suffering for Dakota people, and then take action to achieve justice. This will not happen after the first time Whites contemplate these truths.

It is that deep understanding, however, that will provide the way out of the suffering for us all. That is when all of us will achieve a state of empowerment. It is extraordinarily important then, when Dakota people engage in truth telling, that our allies stand up to support us. It is very difficult to stand alone, and we do so when we have to because we cannot imagine doing anything else, but standing alone is wearisome. It is imperative for individuals to speak out in support of our efforts if they are in agreement with the Dakota struggle for justice. Silence suggests complicity with the status quo. To not speak out is to engage in the crime of genocide denial and to perpetrate another crime against humanity.

Truth telling has the potential to alleviate the burden that all of us carry-Dakota people who carry historical trauma and the pain of ongoing oppression and White Minnesotans who carry the burden maintaining oppressive systems and institutions. The denial of humanity to Minnesota's Original People is a burden carried by all Minnesotans. Truth telling allows us to relieve those burdens and take the next step toward justice. It allows us to engage the question: What does recognition of genocide demand? (93-94)