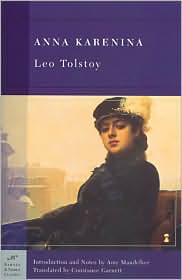 There are two ways to read Tolstoy’s Anna Karenina: in a dead sprint, where you try to cram as much of it into your brain as quickly as possible before you lose steam, or you take advantage of the tiny, bite-sized chapters, and read a piece a day for the rest of your life.

I fell somewhere closer to the former. But it wasn’t fast enough to hold my attention. Parts charmed me and I cooed and clutched the book and made jokes like “Oh, he’s a total Vronsky,” then when I slowed down I got bored and started to resent any paragraph that included politics or the word “peasant” or “Levin.”

There is no point in reviewing Anna Karenina. You’ve either read it, intend to read it, or have no plans to read it. And you’d have to be a glue-sniffer not to know that Anna kills herself in what should be the final page of the book. So, instead, I present 5 reasons you may or may not want to invite Anna Karenina to your fancy lawn party:

1. Anna is stunning. Dark hair, dark eyes, heaving bosom, and a winning personality. She charms everyone. Women admire her, men want her. Early on, she seems unaware of her effect on people. Later, she takes advantage of this to screw with husbands and prove her worth to that sad sack, Vronsky.

2. Anna has that charming woman-killer brother Oblonsky, whose only enemy is his wife, the feisty Dolly. He presses the flesh, borrows money, and acts as an intermediary between dueling factions. You know this guy. He probably sold you something: a cell phone or a PC. You’ll be getting Christmas cards from him for the rest of your life.

3. Anna brings the drama, big time. The more her self esteem plummets, the more entertaining she becomes. It’s all very MTV reality program: Vronsky says something, she hears something else. She says something, he storms off. She gets into a tizzy and decides to kill herself. She’s that friend with bad ideas and plenty of naval gazing. When no one else will set foot within a 10-mile radius, you can rebel against your peers by being her sounding board. Plus, you can invite your illicit lover to her home. Who is she to judge?

4. Whereas plenty of women with children don’t have time to par-tay, Anna severs her connections. Leaves her son with her husband, leaves her mangy daughter with the nurses. Does her hair and goes to a concert.

5. Between the morphine addiction and the suicidal tendencies, there is plenty of Anna fodder to blog about.