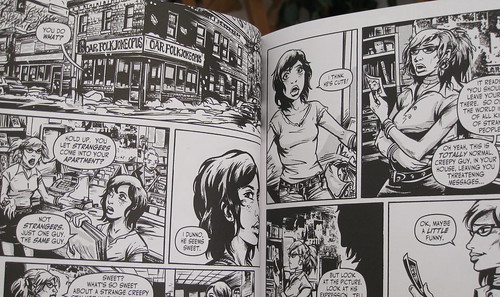 I fell fast and hard for Local, a graphic novel by Brian Wood with art by Ryan Kelly. From about the fourth page on I would read each panel and sigh dreamily, caressing every page before I turned it over to read the next.

I like to think I would have loved Local the same even if it didn’t have one chapter set in Minneapolis at Oarfolkjokeopus. The world will never know if that is true. I am sure people from Richmond, Portland, Halifax, Chicago, Tempe and Austin probably feel the same way.

Local is a big, beautiful graphic novel an anthology of the twelve comic books that follow Megan McKeenan as she travels throughout the US and Canada. The series started in Portland when Megan is a seventeen-year-old runaway and each chapter finds her in a new place and a year older.

The Minneapolis chapter is awesome. It feels a little like one of those picture-find things you used to see in Highlights. How many Minnesota band names can you find in this panel? So great. Plus, the idea that this guy breaks into her apartment and leaves Polaroid pictures of himself is kind of romantic and creepy all at the same time. Magnificent! 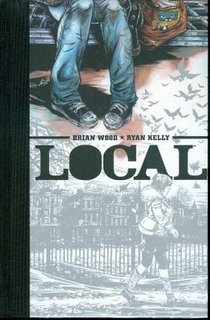 But that wasn’t even my favorite part. My favorite part is the chapter where Megan is something like 22 or 23, working at a movie theater in Halifax, Nova Scotia. It is so emotionally honest and devastating, and very much what it’s like to be a 22-year-old woman that I was stunned such a thing could come from a male writer. It makes me wonder if maybe the 20something psychotic experience isn’t unique to women.

This chapter finds Megan trying on different names and persona. She doesn’t know who she is or who she wants to be, she just wants someone to pay attention to her and she’s willing to do anything to get that attention.

We’ve all been there, haven’t we?

One of the things I enjoyed so much in reading Local is that the reader actually gets to see Megan grow, physically and emotionally. Each chapter finds her a little wiser, a little smarter, and yet still herself. It all just felts so real, as if this were a memoir and not a fictional story (though I guess in there really isn’t much difference in those two anymore is there?). While I do have to admit the ending is a little trite and cliche, the journey getting there is so fulfilling and rewarding that you’re willing to cut the author a little slack.

And, once the story is over there’s still more! At the end of the book Wood and Kelly have included essays and production notes about each book that makes up the anthology. They’re funny and witty, but the best part is that each of them includes a soundtrack to go along with each chapter. It totally reminded me of Largehearted Boy’s Book Notes, and really helped place the chapters in time.

Okay, one final confession. I’ve read this book twice. That’s how much I enjoyed it. It’s one of those you really don’t want to end. Ever.