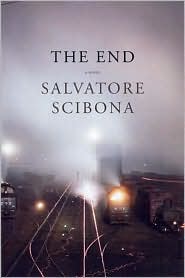 In the winter of 2005, I read Virginia Woolf's Mrs. Dalloway for a college literature course. While many grumbled and murmured throughout the reading, I was enamored with the way Woolf blew up Clarissa Dalloway's entire day into excruciating and meandering detail. I became fond of the many detours often found in fiction by reading Mrs. Dalloway. I believe this is called stream of consciousness storytelling.

As I began reading Salvatore Scibona's debut novel The End, I recognized this demanding form of fiction was present. The Ohio town of Elephant Park was celebrating the Roman Catholic feast day of The Assumption of Mary in 1953 and The End chronicles the lives of six people living in the town and how they connect with each other on this particular day. Scibona made this connection rather late in the book, only after a painstakingly telling of each person's history.

It seems like a winner of a book for me. However, it was not.

Scibona's writing certainly is not to blame. Using the example of Rocco, Scibona showed the devastation of a baker working at a job for decades and finally realizing that he has nothing to show for it. The following are examples of Scibona's many areas of wonderful philosophical inquiry:

Look at the eyes now! Black globes, protuberant, fat. There was another animal in the mask than before. Why, she [Costanza Marini] wondered, do we always look to the eyes? Windows of the soul, she disregarded as fanciful. No, it's the eyes themselves, to be exact, that look to the eyes. They are as competitive in their vanity as we are. (67)

A gull encountering a fish on the beach, she considered, will first dig out its eyes, which are the softest and easiest of access and provide a clean route to the brains, which are soft, too. Is that why we look to the eyes? If I look you in your eye and you flinch, do you suspect me of plotting where to aim my spoon? (68)

It was neither the format nor the writing that bothered me. If the book was mainly about Rocco's epiphany, that would have kept my attention. However, the majority of the book was about the abortionist Costanza Marini and her interactions with a neighborhood girl named Lina and her husband Enzo. The story behind these three was demanding to read and just not that interesting.

This is where I may have failed as a reader. There just are certain places and times that agree with me as a reader; London in the 1920s, Japan in the 1990s, and Germany in the 1500s are a few examples. Ohio in the 1950s is not one, however. In a book as demanding as The End, there has to be some give to my interests to make me devote the time needed to give it the careful reading it deserved.