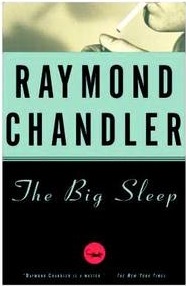 Raymond Chandler's 1939 novel The Big Sleep is apparently the foundation on which the detective novel world was built. The Big Sleep is the first in a series of books that feature Los Angeles sleuth Philip Marlowe. In this tale, Marlowe was hired by an aging millionaire to figure out who was blackmailing him. As always happens in these stories, Marlowe happens to witness other events and talk to other people which make this seemingly easy mission much more difficult and complex.

Perhaps the fact this book is seventy years old is what made it somewhat dated. We have Marlowe always conveniently appearing in the right place at the right time. When he finds himself in trouble, Marlowe always seems to say the right lie to fool someone into dishing him the right information. These ideas have been played many times in other media since the writing of this book. This makes enjoying this book somewhat difficult for me; I've seen much of it before.

Now, a critic of my review might say this is not the book's fault and I should enjoy the book on its own merit. Using that framework, this is a PG-Rated detective mystery that helped reinforce stereotypes of both women and gay men. Women were portrayed as helpless and were easily and necessarily subdued with violence. Gay men were called pansies and fags. Books and movies like this helped perpetuate stereotypes that certainly hold strong today.

It is not all bad, though, when you consider Marlowe as a character. Marlowe has an even keel manner and does not become rattled or intimidated easily. He often played with women in a flirtatious manner. Here is an exchange between Marlowe and Vivian Regan:

She took the photo out and stood looking at it, just inside the door. “She has a beautiful little body, hasn't she?”
“Uh-huh.”
She leaned a little towards me. “You ought to see mine,” she said gravely.
“Can it be arranged?”
She laughed suddenly and sharply and went halfway through the door, then turned her head to say coolly: “You're as cold-blooded a beast as I ever met, Marlowe. Or can I call you Phil?”
“Sure.”
“You can call me Vivian.”
“Thanks, Mrs. Regan.”
“Oh, go to hell, Marlowe.” She went on out and didn't look back. (61)

Marlowe usually stayed calm under pressure and improvised when needed. While tailing Vivian after she left a casino with a large sum of money won at the roulette wheel, Marlowe noticed she was about to be robbed. Crouched behind a tree in the fog, Marlowe sprang to action.

She didn't yell. She didn't move. There was a movement from him, and a dry chuckle.” It better be in here,” he said. A catch clicked and a fumbling sound came to me. The man turned and came towards my tree. When he had taken three or four steps he chuckled again. The chuckle was something out of my own memories. I reached a pipe out of my pocket and held it like a gun.

Like many on the 1001 Books You Must Read Before You Die list (this one is number 611 on my fancy spreadsheet), this must read was just okay.