It is not commonplace for me to sandwich together two books in one post. I usually like to devote one post per book because I can find plenty to write about just on that one book. Since I did not like these two books, I have to combine them both into this one post and rely on something other than words to help fill the void. 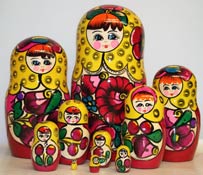 Jesse Ball's The Way Through Doors is like a literary version of the Russian nesting doll, except it is not as linear as the doll. Selah Morse is the Seventh Ministry Municipal Inspector who witnessed a woman get struck by a car and land on her head. Morse went to the hospital and claimed her as his girlfriend, gave her the name of Mora Klein, and then took her back to his apartment. Morse began to tell her stories and that is where I became lost in the maze.

I typically enjoy nonlinear writing. However, this book was a bit much for me. I became lost early on and did not recover enough to appreciate the story. It is disappointing whenever this happens to me because I am left feeling a little odd. Despite my failure, I can appreciate the Ball's skill in creating this book.

Perhaps I would have been in a better place if I had not read Maureen McCormick's memoir Here's the Story before Ball's book. This memoir is a slight step above Cody Diablo's abomination known as Candy Girl because I tend to believe McCormick is telling the truth. However, it is very vanilla and can be summed up in a couple of sentences.

I would rather not dive into the sordid details dished out by McCormick (Eve Plumb's farting being one fine example). I can imagine is must be hard to be a former child actor without having the necessary tools to deal with life after the cameras stop filming. I was naively hoping this book would offer something philosophical about this life. However, it is simply a telling of what happened with the associated dirt to add some color.