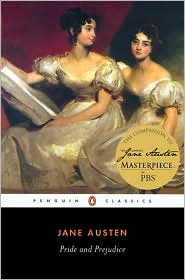 Also, zombies are dumb and hipsters love them. Hipsters ruin everything with their stupid fetishes — like bacon and cupcakes.

But this isn’t about zombies or hipsters, this is about Jane Austen’s book which I want to call pre-Edwardian chick lit. I have no idea when or what pre-Edwardian is. However, I do know what chick lit is, and this is totally it. Of course it’s like the great great great grandmother of chick lit, which makes it kind of cool.

Frankly, I was surprised by how much I enjoyed Pride and Prejudice. I mean really it’s a book that’s all about getting women properly married so they can stay in their proper womanly place. Barf. But it’s also about manners and misconceptions and changing your mind.

I was going to go on and on about the plot, but it’s kind of one of those stoner plots that leaves you saying “and then the one sister ran away with that dude, and then so Elizabeth ran into Mr. Darcy, and then they were all confused, and then. . . ”

What you need to know is that Elizabeth Bennett is the headstrong heroine and Mr. Darcy is the misunderstood hero. There’s a lot of letter writing and wrong assumptions. But it all works out in the end. It’s really just a big fat romance novel. However, when you factor in the time in which Austen was writing it (1790s) you can see how it really is a bold statement on marriage and women making their own choices (even if those choices all involve who to marry).

Like Crime and Punishment, this is one of those books that I’m really glad I read because of the role it plays in so much popular culture today. Plus, Austen’s writing voice is really charming and easy to get carried away with. I spent at least a week talking to myself as if I were Elizabeth Bennett. It’s always a good sign when a character infects you like that.