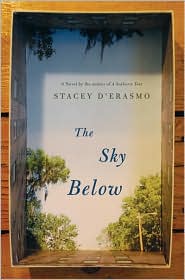 Sometimes you end up sitting next to a stranger, who has your undivided attention for a few hours. She starts telling you a story in a low storyteller voice, using pretty phraseology and vivid imagery, and just went you’re kind of lulled into a word coma, she says something funny. You have to go back and rewind the line in your head, hear it again, laugh, and then continue listening.

Then all of a sudden, the storyteller goes a little loco. And you’re like “I was with you up until the point where the protagonist starts feeling for feathers growing out of his neck. And by the way: What the hell is he doing in Mexico?” She just looks at you, and keeps going. Puts the protagonist in a tree, wearing wings. Kills a little girl with bad teeth. He hatches an egg. And you feel a little misled because this was a good story. You trusted this storyteller to stay honest. But this deviation has you second-guessing everything she said, all those words you liked, two hours ago.

That is exactly what reading The Sky Below by Stacey D’Erasmo is like. It starts with Gabe Collins, imaginative and sensitive and arty. His father leaves. Gabe becomes a hoarder of things and money, who eventually turns to petty crime and liaisons with men in bus stop bathroom stalls. Then he is in art school, taking his found objects and creating something like dioramas. Then he is an adult, writing obits for a small newspaper, ghostwriting popular novels, stealing knick knacks and taking platonic baths with his best friend Sarah and ditching his boyfriend at the ballet.

Gabe is such a great character. Not necessarily likable. Questionable motives. A plotter who isn’t smart enough to plot enough steps ahead. He’s a little lazy, still a hoarder. He keeps bricks of money in his freezer.

But his story becomes derailed when he finds out he has lazy cancer, and he takes off for Mexico in search of something. His father, I guess. He meets people in a commune and decides to sleep with a woman who refers to herself as Malcolm X. [This is actually a pretty hot scene]. But the whole time I was wondering why? What does this mean? It has to mean something because it’s not interesting to stand alone as a story.

I don’t know Stacey D’Erasmo, but I bet that she says things like “I just let the characters tell their own story. Gabe led me to the house on Pineapple Street. Gabe told me he wanted to be in Mexico. Gabe put himself in a tree, wearing wings, and then he took himself home again.” And my suggested response would be to nod, tell her she makes stunning sentences and that this book is unlike anything you’ve ever read before. But that it wasn’t enough.