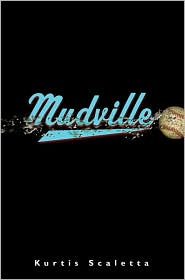 I admitted to Kurtis Scaletta yesterday that I approached reading Mudville with more than a little bit of trepidation. It’s one thing to review a book my some faceless entity, but I had exchange a few e-mails with Kurtis, giving him a face and personality.

After admitting my fear, I thanked him for writing a good book. Mudville is a charming novel for what are dubbed middle grade readers about a boy named Roy who loves baseball.

Twelve-year-old Roy lives in the Moundville, a strange little town where it has not stopped raining for 22 years. The rain started during the annual baseball game between Moundville and their arch-rival Sinister Bend. Never in the history of the rivalry had Moundville beaten Sinister Bend. In fact, it was Roy’s dad who had hemmed and hawed at the plate to get the game called on a rain delay, hoping to replay the game when Moundville’s star player was in better health.

Once the rain started it never stopped. In fact the unending rain had eventually washed away the town of Sinister Bend. Of course the weather has not dampened Roy’s passion for the game. The book opens with him returning to Moundville after baseball camp to find a strange, fantasy-book reading kid named Sturgis sitting on the couch. Roy’s dad explains that he’s a foster kid, and he’s going to be living with them.

Shortly after Sturgis’ arrival at the McGuire house the rain stops. The town doesn’t quite know what to do, but Roy and Sturgis set to rebuilding the old baseball field in hopes of setting up a team. Along the way Roy discovers that Sturgis is a kickass pitcher, and they get a team together and eventually set up a game to revive the old Sinister Bend- Moundville rivalry.

This is one of the most charming books I’ve read in a long time. It’s sweet and innocent and has an air of mysticism about it that keeps it from feeling like over-sugared kidlit.

Roy’s passion for baseball so encompasses him and the reader that we never even question some of the more hinky things going on in the story. Like Roy, we’re just too involved in the importance of baseball and teaching the team the game that we take at face value any information we learn about Sturgis and never give it a second thought.

So when some revealing details about Sturgis’ story are revealed, we are just as taken aback and betrayed as Roy is.

When I first read the big reveals, I was all THAT’S NOT FAIR the author was being coy with us. But then I just realized it was me being a big baby for not suspecting anything in the story that Sturgis and Roy’s dad were telling us. Hrmph.

I gotta hand it to Scaletta, he got me and that’s impressive.

Even though this book is aimed at younger readers, I enjoyed reading every page of it. I was throughly engaged and never once felt like the story or the writing was beneath me or too simple. Like I said there’s a lot of mysticism regarding native americans, curses, and weather. It’s really interesting.

What I think I liked the most was that Scaletta seemed to anticipate the questions readers might have and answered them. Just about the time I was wondering where the hell Roy’s mom was, he answered it. When I wondered about how nobody was freaking out about the two decades of rain, he answered that.

And, I think what I love the most is a few paragraphs toward the end of the book where Roy talked about epiphanies, learning about them in school, and then tells us about his own epiphany. It’s awesome.

Can you tell I totally have a crush on this book? Because I do.