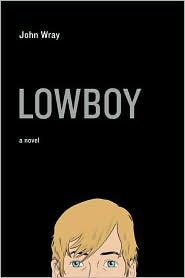 There is this moment in John Wray’s Lowboy where a character says to the schizophrenic hero: “Listen to me, Heller. You’re beautiful and you make me laugh and I want you to take me to that place that we just saw, but you need to stop saying things like that. They creep me out, okay? And you’re not creepy.”

And that completely sums up the experience of reading this novel, which spans roughly a day in the life of young teenager Will “Lowboy” Heller.

The story opens with him on the lam in the New York subway system after spending a year and a half institutionalized. He is hell-bent on saving the world from global warming, and believes he can do this by losing his virginity.

In alternating bite-sized chapters, his mysterious mother — a beautiful, hard-to-read immigrant with an indiscernible accent — is paired with detective Ali Lateef and is searching for Lowboy, hoping to find him before he hurts someone or himself.

Lowboy’s chapters are a collection of dizzy sentences, more paintings than linear thought. One minute he is deciding to buy cupcakes, but then the simple acts of ordering what he wants and exchanging money become too complicated. It’s like the wheel in his brain gets caught up on a cog and suddenly everything becomes distorted and chaotic until he can slow down and start again. Which always takes longer than is comfortable.

His mother, whom he calls Violet, provides Lowboy’s backstory via Lateef’s interrogation. Most chapters include some new piece of information that explains who Lowboy is, how he got there, and what he wants. But they also leave? questions and a growing suspicion that there is more to the story.

This book is technically sound: Lowboy is likable and unpredictable and interesting. And like that character, I did want to beg him to stop talking like that. Meanwhile, Violet’s day-long relationship with Lateef is tricky to define: antagonistic? flirtatious? I’m not sure how Wray invented this or juggled it, but there are no seams showing.

My only complaint is that my own lack of familiarity with the subway system made it hard to envision exactly where the characters were, or where they were headed. Especially when the descriptions are coming from Lowboy. So I got a little confused.

Also, I have a question about the ending, so someone needs to read this ASAP so we can talk about it.