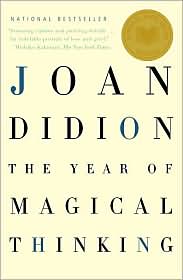 I picked up The Year of Magical Thinking because in his answers to the 6 questions we always ask, Bill Tuomala said he would take Joan Didion out to Jax. Plus, I vaguely remembered hearing great, great things about this memoir Didion wrote following the death of her husband.

Didion’s husband, writer John Gregory Dunne died on December 30, 2003 while the couple’s only daughter, Quintana, was in a coma having some sort of terrible infection as a result of pneumonia. Tragic as hell. This book tells the story of the year that passes from the time Dunne dies in their apart until December 30, 2004. Part tender love story, part study of grief, and part tribute, I had a tough time with this one.

There were parts of this memoir that I really loved, when Didion wrote about how parts of their life slipped into Dunne’s novels, how she was sure that he knew he was going to die, how Dunne carried around notecards to write on. There were parts of this memoir I really disliked. There seemed to me a lot of name dropping, things like: I called Firstname Lastname the Blah Blah Blah of some country to do some high-falutin’ favor for me because I am famous and so is my husband. While name dropping is usually pretty annoying, this was even more frustrating because I didn’t know the names that were being dropped. It was the use of first name and last name that made me feel as though I should know these people. It was rarely, “my friend Jenny” and mostly, I called Firstname Lastname to see if they’d meet me for dinner at the Beverly Wilshire.

It’s a bit ironic that Didion spends a great deal on the subject of mourning and how those in mourning worry so much about being seen as self-indulgent, and this memoir felt really self-indulgent. In my head, it’s suffering by comparison to Elizabeth McCracken’s An Exact Replica of a Figment of My Imagination which is also a sort of memoir about mourning but doesn’t feel at all self-indulgent.

But even that air of self-indulgence cannot take away from the beauty of Didion’s writing. Throughout the book she would repeat bits of poetry or a line she had used earlier in the book. Where this might seem redundant, I really enjoyed it. It gave the entire book a feel of liturgical prayer like the Kaddish or some other death ritual. It was a nice flourish by a truly gifted writer.

I feel a little bad for not giving this one two hearty thumbs up. However, I enjoyed enough of it to want to give her Slouching Toward Bethlehem a shot.